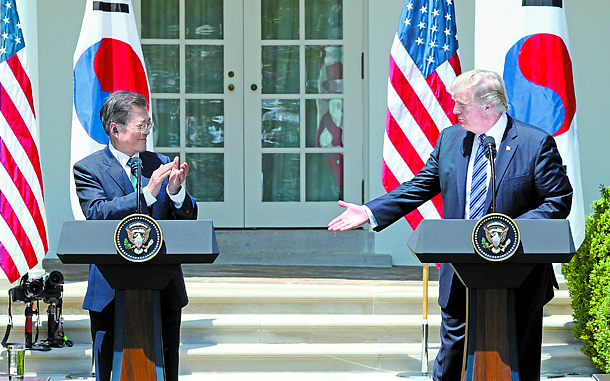 U.S. President Donald Trump, right, extends his hand to Korean President Moon Jae-in for a handshake as the two leaders complete a joint press briefing in the Rose Garden of the White House on Friday, local time. [KIM SEONG-RYONG]

WASHINGTON - President Moon Jae-in managed to convince U.S. President Donald Trump that South Korea will take the lead on security affairs concerning the two Koreas, but the two leaders clashed on trade and Seoul’s contribution to the costs of American troops in Korea.

Moon and Trump sat down for their first summit at the White House on Friday to discuss a range of issues including the South Korea-U.S. alliance, joint efforts to end North Korea’s nuclear arms program and bilateral trade. A six-point joint statement was issued after the summit and a joint press conference.

While the two leaders agreed to bolster the alliance and work together for a “complete, verifiable, and irreversible denuclearization of the Korean Peninsula in a peaceful manner,” there was obvious friction over Trump’s demand to resolve the trade imbalance between the two countries and revise the Korea-U.S. free trade agreement (FTA).

The joint statement wasn’t issued until seven hours after the two leaders completed their summit and news conference at the White House.

In the statement, Trump made clear his support for Moon’s initiatives on Korean Peninsula affairs such as resuming the inter-Korean talks and establishing an environment for peaceful unification of the two Koreas. Trump supported Moon’s idea that South Korea will take the initiative in the combined defense posture.

“Noting that sanctions are a tool of diplomacy, the two leaders emphasized that the door to dialogue with North Korea remains open under the right circumstances,” the joint statement said. “In reaffirming our two sides’ shared top priority to resolve the nuclear issue, the two leaders emphasized that the United States and the ROK do not maintain a hostile policy toward North Korea and, together with the rest of the international community, stand ready to offer a brighter future for North Korea if it chooses the right path.”

ROK stands for the Republic of Korea, the official name of South Korea.

“President Trump supported the ROK’s leading role in fostering an environment for peaceful unification of the Korean Peninsula,” the statement said.

After the summit, Moon expressed satisfaction with Trump’s support for his North Korea policy. “President Trump and I agreed today that the resolution of the North Korea nuclear issue is our top foreign policy priority and that we will closely coordinate our policies,” he said. “In this vein, we agreed to work together toward a fundamental resolution of the North Korea nuclear issue based on a phased and comprehensive approach, utilizing both sanctions and dialogue.”

In the joint statement, Korea’s leading role was also endorsed for the Korea-U.S. combined defense posture. “The two leaders decided to continue the alliance’s work to expeditiously enable the conditions-based transfer of wartime operational control of ROK forces,” it said. “The ROK will continue to acquire the critical military capabilities necessary to lead the combined defense, and detect, disrupt, destroy, and defend against North Korean nuclear and missile threats, including through interoperable Kill Chain, Korean Air and Missile Defense (KAMD), and other Alliance systems.”

Seoul and Washington agreed in 2006, during the presidency of Moon’s political mentor and partner the late Roh Moo-hyun, that Korea will regain wartime operation control of its troops from the United States. The transfer was scheduled for 2012, but was delayed by the succeeding conservative presidents. Moon said during the presidential campaign that he will complete it during his presidency.

The agreement between Moon and Trump indicates that the transfer process will pick up speed.

And yet the two leaders were plainly not on the same page over what to do with the five-year-old bilateral free trade pact. Trump aggressively pushed for a renegotiation while Moon and Korean officials tried to dodge the issue.

“President Trump and President Moon committed to foster expanded and balanced trade while creating reciprocal benefits and fair treatment between the two countries,” the joint statement said. “In that regard, the two sides further committed to foster a truly fair and level playing field, including working together to reduce the global overcapacity of such basic materials as steel, as well as non-tariff barriers to trade.”

Jang Ha-sung, policy chief for Moon’s presidential office, said after the summit that the two countries did not agree on renegotiation of the FTA. “At the summit, President Trump raised issues about a large U.S. trade deficit [with Korea], particularly trade imbalances in the automobile and steel industries,” Jang said. “He raised the need to take measures or have a new negotiation.

“Moon responded by stressing the mutual benefits of the Korea-U.S. FTA and proposed that officials from the two countries jointly analyze and evaluate the impact of the FTA,” Jang said. “The two sides did not agree on renegotiation of the FTA. All agreements on trade are in the joint statement.”

Trump’s displeasure with the trade deficit with Korea was first expressed earlier this year, when he threatened to renegotiate or terminate the Korea-U.S. free trade agreement, calling it a “horrible deal.”

Negotiators in Seoul and Washington agreed to negotiate a bilateral free trade pact between Korea and the United States in 2007 during the administration of Roh. After a renegotiation in 2011, the revised pact took effect in 2012.

A senior U.S. official briefed the Korean press earlier this week and said Trump would address the trade issue at the summit. “His view is that there are aspects of the trade relationship that aren’t in balance,” the official said. “He will be, I think, forthright in talking about things like U.S. automobiles and the fact that there are still some barriers to U.S. auto sales in Korea.”

He said there is still a “large gap” in the two countries’ trade balance. “It’s caught the president’s eye,” he said, “and I think that he’ll talk about that.”

After an official dinner Thursday with Moon, Trump posted a comment on his Twitter account. “Just finished a very good meeting with the President of South Korea,” he wrote. “Many subjects discussed including North Korea and new trade deal!”

Before starting the summit with Moon on Friday in the Oval Office, Trump once again reiterated his position. “We accomplished a lot having to do with our thoughts on North Korea and very much our thoughts on trade,” Trump said in opening remarks. “We are renegotiating a trade deal right now with South Korea, and hopefully it will be an equitable deal. It will be a fair deal for both parties. It’s been a rough deal for the U.S., but I think that it will be much different and will be good for both parties.”

He continued to stress the issue at the media conference. Complaining that the U.S. trade deficit with South Korea increased by more than $11 billion since the FTA was implemented, Trump said he discussed auto and steel trade issues with Moon at the summit.

Moon, however, did not make any specific mentions of trade, including the fate of the FTA, at the press conference. North Korea was Moon’s key topic in the opening remarks for the summit and also his media statement.

Sarah Sanders, deputy press secretary of the White House, said later Friday that a special joint committee meeting was called by the United States Trade Representative “to start the process of renegotiating and amending the deal.” She said the meeting was called at the direction of Trump.

“And as always, and as we’ve said many times before, the president is committed to making sure he gets the best deal and a better deal if possible when it comes to trade. And that’s the current status of where they are,” she said.

Another challenge the Moon administration faces after the summit was Trump’s demand that Korea pay more for the cost of the U.S. military’s presence in the country. Although the issue was not addressed in the joint statement, Trump made clear that he wants Korea to pay more.

Stressing that the United States will defend itself and its allies, Trump said “As part of that commitment, we are working together to ensure fair burden-sharing in support of the U.S. military presence in South Korea.

“Burden-sharing is a very important factor,” he continued. “A factor that is becoming more and more prevalent, certainly in this administration.”

It was first time Trump publicly spoke about Korea paying more since he took office in January. He has said repeatedly that allies must pay more for U.S. troops. Shortly after his inauguration, Trump took up the defense burden issue with the North Atlantic Treaty Organization (NATO). He criticized NATO allies for their heavy dependence on the U.S. military and the countries decided to boost their defense spending this year in response to Trump’s pressure.

The Korean government pays some of the cost of U.S. Forces Korea. The latest agreement reached in 2014 said Korea would pay 920 billion won ($803.6 million) that year and increase the amount in the following years by reflecting the change in the consumer price index.

The agreement was valid for five years, and the amount covers roughly a half of the U.S. Forces Korea’s total costs.

The two countries are to start a negotiation later this year to decide a cost sharing plan that will go into effect in 2019.

Despite earlier speculation that the two leaders would address the controversy surrounding the U.S. deployment of an advanced antimissile system in Korea, the issue was not addressed. Moon spent time on Thursday meeting leaders of Congress and clarified that he has no intention to delay or scrap the deployment.

He also commented in a lecture held at the Center for Strategic and International Studies on Friday evening that Korea’s decision to allow the U.S. deployment of the Terminal High Altitude Area Defense (Thaad) system is a “matter of sovereignty,” and, “It is not right for China to make inappropriate intervention.”

After a meeting with Korean residents in the United States, Moon wrapped up his first presidential trip and returned to Korea. He is scheduled to arrive in Seoul Sunday evening.