Volleyball pro reflects on her move to China

Volleyball pro reflects on her move to China 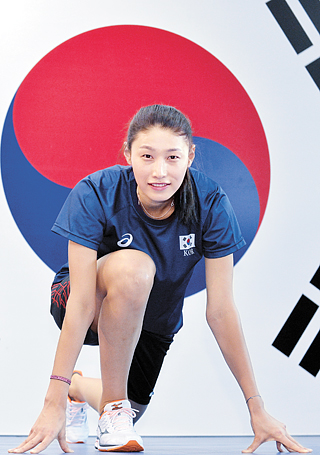 Kim Yeon-koung poses for a picture at the Jincheon National Training Center. Starting on Friday, Kim and the Korean national women’s volleyball team will be competing at the 2017 FIVB Volleyball World Grand Prix in China. Though Kim considered retiring after the Rio Olympics in 2016, as Korea failed to win a medal, she will once again be training with the goal of winning a gold medal at the 2020 Tokyo Olympics. [KIM SUNG-TAE]

When Kim Yeon-koung, the world’s highest-paid volleyball player, announced her intention to join the Chinese club Shanghai Guohua Life, many questioned her decision, as the Chinese league is considered quite small.

Kim started her volleyball career with the Cheonan Heungkuk Life Pink Spiders in 2005 and played until the 2009 season. Kim left to play in the Japanese league, with JT Marvelous, for two seasons and then played six seasons for Fenerbahce of the Turkish league.

Kim won the MVP award several times while playing in the Turkish league and has become the highest paid volleyball player in the world.

“It’s true that I get paid the most but it’s not that much compared to other sports,” Kim said.

In the world of volleyball, players don’t often talk about their annual salary, but through Worldofvolley, it was reported that Kim’s salary is estimated at 1.2 million euros ($1.36 million).

Moving to the Chinese league will allow Kim’s schedule to be more flexible with the national team, but in the short term, it can mean that she’ll have less competition and less salary. Despite the short-term risks, there are two reasons behind Kim’s decision to move to China - to win a gold medal at the Olympics. 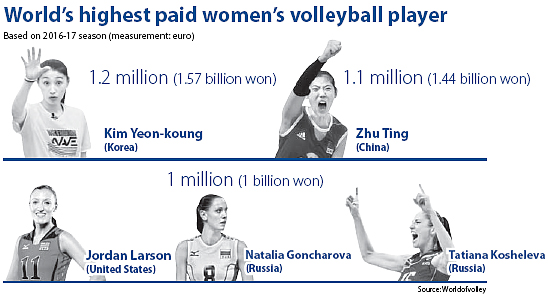 Right after the Rio Olympics, Kim was worn out and was suffering from an injury, but she still managed to get her former team, Fenerbahce, to the top of the Turkish league.

“I was too tired after the Olympics and it wasn’t easy traveling from Korea to Turkey every time,” Kim said.

Since the Chinese league has a fewer games, Kim can now play harder for the national team and her club. Kim, who joined the Korean national team in 2005, is the second oldest player on the team. She started as the youngest member on the team, and this year, is expected to play the role of leader.

“Being a leader is hard,” Kim said. “If I just thought about myself, then I should retire now. But I’m competing for my country against other countries’ best players. When I play for Korea, I feel infinite responsibility, but I do it because it’s something I like to do.”

“Their physical condition is the most important factor in our upcoming schedules,” Hong Sung-jin, head coach of the Korean national team said. “Depending on the situation, I’ll consider resting Kim Yeon-koung.”