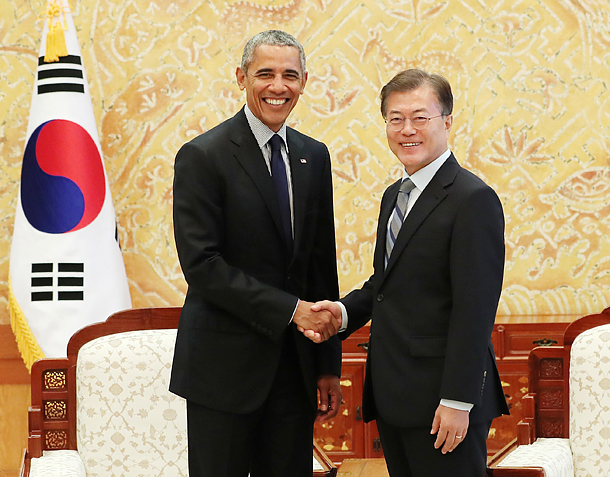 Ahead of President Moon Jae-in’s trip to Germany this week, anticipation is high that he will follow in the footsteps of his predecessors and announce a new road map for uniting the two Koreas.

Moon is scheduled to leave for Germany on Wednesday for a bilateral summit with German Chancellor Angela Merkel and to attend the Group of 20 Summit.

He will first visit Berlin for the bilateral summit with Merkel and stay there for two days. He will then travel to Hamburg and participate in the G-20 conference on Friday and Saturday, to be attended by leaders from around the world, including the United States, Japan and China.

Expectations are high that Moon will use the six-day trip to Germany as an opportunity to announce his North Korea policy.

The announcement is expected to be made during his speech at the Koerber Foundation in Berlin. “It was declared in the Korea-U.S joint statement that we will be in the driving seat on the issues concerning the peninsula,” a Blue House official told the JoongAng Ilbo on Monday. “Based on this, we can make public a new proposal to the North.”

During his summit with U.S. President Donald Trump last week, Moon won the U.S. leader’s backing for his initiatives on Korean Peninsula affairs, such as resuming the inter-Korean talks.

“President Trump supported the ROK’s leading role in fostering an environment for peaceful unification of the Korean Peninsula,” a joint statement issued after their summit also said. “ROK” stands for the Republic of Korea, the official name of South Korea.

Since he took office, Moon, a liberal president who promotes engagement with the North, proposed a two-step resolution to the North’s nuclear crisis - nuclear freeze and dismantlement. Moon proposed to resume inter-Korean talks under the right conditions, presumably nuclear freeze.

Sources told the JoongAng Ilbo that Moon is expected to stress the importance of civilian exchanges and cooperation between the two Koreas, citing the example of German reunification.

Holding a reunion of Korean families or starting inter-Korean sports talks could be proposed as part of the initiatives. Last month, Moon already proposed the North Korean athletes attend the Pyeongchang Winter Olympics in 2018.

On Monday, he met with International Olympic Committee President Thomas Bach and requested the committee’s support for North Korea’s participation.

He told Bach that the United States backs Korea’s desire to play a leading role in building peace on the peninsula and to have humanitarian talks, giving momentum to his plan to push forward inter-Korean cooperation in sports. He said he will also seek China’s support for his proposal.

Moon also reiterated his engagement policy when he met with former U.S. President Barack Obama on Monday at the Blue House. “I and Trump agreed to impose sanctions on the North to resolve nuclear and missile issues, but also to have dialogue,” Moon was quoted as telling Obama by his spokesman, Park Soo-hyun. “Now will be the final opportunity for the North to open the door to a dialogue.”

In the past, a Korean president’s visit to Germany was used as an opportunity to announce a blueprint for unification. In March 2000, then President Kim Dae-jung made his famous Berlin Declaration, laying the foundation for the historic inter-Korean summit.

The speech, given at the Free University of Berlin, is known as the “Berlin Declaration,” and in it Kim urged the North to start dialogue with the South, to resolve the separated family issue and to exchange special envoys. He also offered to help the North over economic hardships.

The speech served as an important milestone for Kim’s visit to Pyongyang three months later and to have the first-ever inter-Korean summit with then- North Korean leader Kim Jong-il in June 2000.

Moon’s predecessor, Park Geun-hye, also announced her road map for unification when she visited Dresden, Germany, in 2014. She proposed to build infrastructure for mutual prosperity, and resolve humanitarian issues and integrate the two peoples.

Park’s Dresden Doctrine, however, was rejected by Pyongyang on the grounds that it promoted unification by absorption. Park largely based her initiative on the example of German unification, where West Germany absorbed the East. Inter-Korean relations quickly froze following the Dresden Doctrine, and the North continued its nuclear and missile provocations. The South responded with harsh measures, such as pulling the plug on the Kaesong Industrial Complex.