No shot at renegotiation

No shot at renegotiation 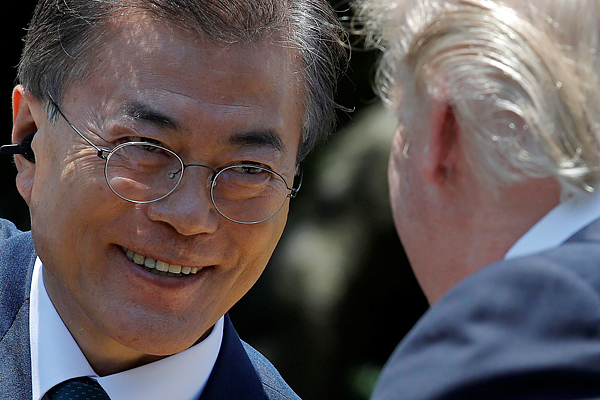 South Korean President Moon Jae-in looks at U.S. President Donald Trump after delivering a joint statement from the Rose Garden of the White House in Washington on June 30. [AP/YONHAP]

The South Korea-U.S. summit was a successful one as concerns the deployment of the Terminal High Altitude Area Defense (Thaad) system and North Korea policy coordination.

At the joint news conference with President Moon Jae-in after the summit, U.S. President Donald Trump pointed out that the trade deficit of the United States increased by $11 billion in five years since the free trade agreement (FTA) — particularly in the automobile and steel sectors.

Trump’s basic understanding is that as exports of American cars to Korea need to increase, Korean steel’s export to the United States should be restricted.

President Trump’s prime concern is employment, especially in the area of manufacturing jobs. He believes that manufacturing jobs are disappearing in the United States due to unfair trade. He claims that countries with a trade surplus, such as China and Germany, are preventing exports of American goods by using currency manipulation and trade barriers and artificially promoting exports to the United States.

Most American economists do not support Trump’s unfair trade claims. They view that the cause of decrease in American manufacturing jobs is not unfair trade but technological advancement such as automobile and IT, and globalization that aggravated the global value chain.

Last year, Korea’s trade surplus in automobiles and auto parts was $20.1 billion, accounting for about 90 percent of Korea’s gain from trade with the United States. In contrast, Korea’s steel export in 2016 was $1.68 billion, far less than its automobile exports. However, steel is an industry that is under pressure due to worldwide overproduction, and there are calls for restricting steel imports in the United States.

But it is unclear if the summit will lead to Washington’s demand for renegotiation of the FTA. The American auto industry is expressing discontent with the Korea-U.S. FTA, but agriculture, pharmaceutical and financial industries and the Chamber of Commerce support the deal. Scrapping the FTA, which Trump mentioned during his campaign, is unlikely, and the likelihood of overall renegotiation of the FTA, which may hinder the interest balance of the two countries, is also very slim.

The FTA is a comprehensive agreement encompassing goods, services, intellectual property, investment, rules and conflict resolution processes. Various channels of dialogue have been prepared to exchange opinions on trade issues. At the summit, Trump mentioned the possibility of improving non-tariff barriers on automobiles in Korea and the prevention of dumping Korean steel products. These issues can be addressed without revising the agreement. Therefore, the debate over whether a renegotiation was demanded at the summit should be avoided. We only need to devise effective ways to respond to Washington’s demands.

As a trade policy is not a policy with an independent goal, but a part of economic and foreign policy, the objective should be designed to support higher government policies. The Moon administration’s policy direction is income-driven growth, and trade policy should be set to accommodate this.

*The author is a senior researcher at KDI.