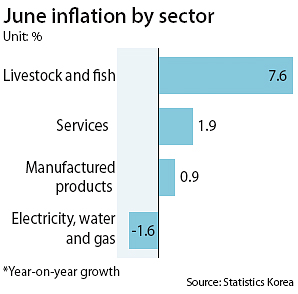 Consumer prices continue to swell due to a drought that spiked prices of fruits and vegetables.

Fresh fruit prices jumped 21.4 percent year on year in June, the highest rate since March 2011, when the increase was 23.3 percent.

According to Statistics Korea Tuesday, consumer prices in June rose 1.9 percent compared to June 2016, tightening living conditions for low and mid-income households. Last year, inflation hovered around 1 percent but since January it has neared the 2 percent level.

Prices of fresh produce in general jumped 10.5 percent in June, the highest growth since January’s 12 percent.

“It appears that the drought that hit the country had some impact on prices,” said Yoo Young-je, a director at the statistics agency. “Another reason for the hike in fresh fruit is a shrinkage in the cultivation areas for watermelons and Korean melons.”

Prices of livestock and fish jumped 7.6 percent in June when compared to the previous year.

By item, the price of fresh eggs rose 69.3 percent year on year as a result of an outbreak of avian influenza virus in the country. Squid prices increased 62.6 percent and watermelon prices went up 27.3 percent.

“The recovery of egg supply in the country, which was hit by the AI virus, continues to be delayed and there are various factors that might lead to further hikes in consumer prices such as weather issues like the drought,” said Lee Joo-hyun, a director at the Ministry of Strategy and Finance. Daily production of eggs in June was 34.17 million, which is about 85.4 percent of the normal average.

“We will come up with ways to stabilize both the supply and prices of products out in the market,” Lee added. “The government will also monitor uncertainties to deal with products that are experiencing continuous growth.”

By region, inflation increased the most in Seoul and Gwangju, by 2.1 percent, followed by Ulsan (2 percent), and Incheon (1.9 percent). The inflation rate was the lowest in South Gyeongsang, 1.5 percent in June.