Rashid wants to improve the world - by design : Artist’s exhibition at Seoul Arts Center is a rich, tactile experience

Rashid wants to improve the world - by design : Artist’s exhibition at Seoul Arts Center is a rich, tactile experience 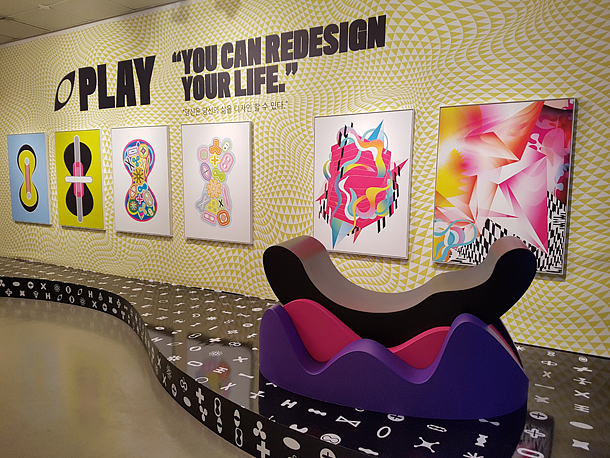 The Kama Love Chair at the end of the Karim Rashid exhibition, “Design Your Self,” shows Rashid’s focus on human nature and what’s natural for humanity. The chair, as explained by a professional docent, had been inspired by three positions used during intercourse. The exhibition opened on June 30, and will run until Oct. 7 in the Seoul Arts Center, southern Seoul. [YOON SO-YEON]

Design is everywhere. So much of what we see, touch, hear and taste is designed in some way, somehow. A designer who took this idea to the extreme is Karim Rashid, an industrial designer who infused the idea of design into people’s everyday lives at a time when design was considered a posh extravagance only for those who could afford it. And now, Rashid has come to ignite Seoul with his bright ideas and limitless passion. From June 30 to Oct. 7, the Seoul Arts Center in southern Seoul will hold the Karim Rashid exhibition, “Design Your Self.”

“I’m a painter inside, and I feel this necessity to communicate on the artistic level, and not just on the realistic level,” said Rashid in the press conference prior to the opening of the exhibition on June 29. Although Rashid is commonly known as a designer who has collaborated with over 400 companies around the world, his works extend to multiple realms of art, from designing everyday things like water bottles and pepper containers, to creating a modern space to surround his signature furniture. This may be a designer’s exhibition, but what you see is more than just a collection of clever furniture.

There are officially some 350 pieces of work put on display, such as furniture, objets d’art, design sketches, paintings and sculptures that people can not only look at, but touch and feel for themselves. So rather than just imagining what it would feel like to sit on one of Rashid’s famous curvy sofas, visitors get an opportunity to appreciate his work with their very own bodies. On top of that, even the vivid colors and eye-catching patterns of the walls are chosen from Rashid’s design archive.

Looking around the seven sections of the exhibition - Karimstory, Beautification of Life, Hall of Globalove, Into the Scape, Digipop, Era of Mass Production and Mission for Humanity - visitors can see that Rashid’s motto is simple, yet powerful: “Design is about shaping contemporary experience and shaping our future lives.” Just as his motto goes, there are two main themes penetrating the exhibition: designocracy and digipop.

Designocracy, which comes from the words “design” and “democracy,” seeks that members of the public equally enjoy the fruits of design, regardless of their economic backgrounds. “Design’s agenda is for the mass market, for everybody,” explained Rashid.

“Every day we touch 600 objects each, every one of us,” he said. “If we design the things that surround us better, then we make the world better.”

The Digipop section shows Rashid’s artistic side, which combines the digital motif with analogue format of painting. “In the 21st century, we live in the digital age. And I’ve noticed that in the last 20 years, I’ve become quite obsessed with this idea of communicating the immaterial digital age into the material world. In other words, how does it translate? And are we, as a collective digital culture, physically shaping this world as we do shape the world via communication and data-driven age?”

Thus, even though the exhibits are laid out in a certain section of the room, his works transcend given boundaries. For instance, the Globalove section features Analogizm, a sculpture that is an “appeal to unity without having been limited to conventional boundaries.” In it, Rashid used wood, one of the most natural materials for a sculpture, to visually express philanthropy, along with a digital audio technology which allows those who step inside the gigantic head figure to experience multi-sensuality and timelessness created by the closed space.

From Left: Karim Rashid at the press conference prior to the opening of the exhibition June 29, the Analogizm sculpture inside the exhibition and a collaboration by Rashid and Kim Min-sun, a Korean artist, “Push Pin.” [ART CENTER IDA, YOON SO-YEON]

The Kama Love Chair located at the end of the exhibition is difficult to grasp without the given explanation that Rashid was inspired by the three sex positions of a couple making love. To Rashid, the essence of design lies in capturing what’s most natural for the contemporary human being.

Other parts of the gallery include works that have been redesigned for the Korean exhibition, such as the Pleasurescape, and collaborations with Korean artists.