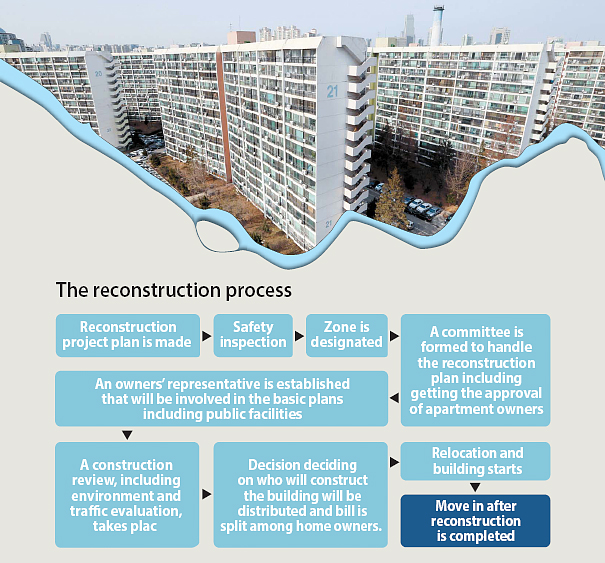 The Seoul Metropolitan Government published a booklet on June 29 questioning whether the maximum height that apartment buildings can be constructed, currently set at 35 floors, should be extended to 50 floors.

This is the first time that the Seoul government has published a booklet that raises the question.

The booklet was co-authored by Bahk Hyun-chan and Jung Sang-hyuk, two professors at the Seoul Institute, a research center under the Seoul government.

The two authors argued that the 35 story limit isn’t just a figure that the Seoul government has decided on a whim. They claimed that the current limit is the appropriate height to ensure the public’s right to view the Han River. 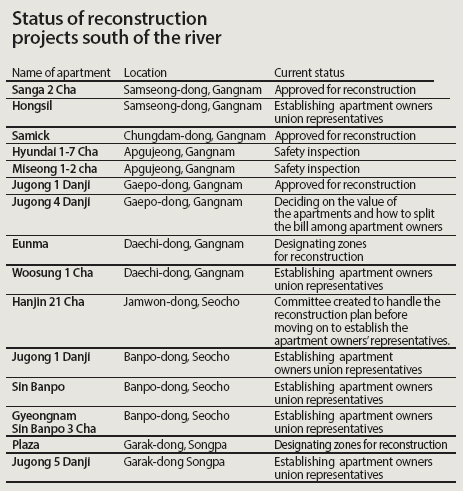 The publication is targeted at the reconstruction projects that are underway in three popular districts south of the river - Gangnam, Seocho and Songpa.

The construction projects in these districts have been in conflict with the Seoul government as they are pushing to build apartments higher than the current 35 floor maximum.

Adding to the conflict, the central government announced on June 19 that it will not extend the suspension that allows apartment owners to avoid paying a percentage of the profits made from apartment reconstruction projects to the government. The temporary suspension on coughing up the exceeding profit that was introduced in 2013 expires at the end of this year.

Under President Roh Moo-hyun the government in 2006 created a regulation where apartment owners pay 50 percent of excess profits when the value of a reconstructed apartment exceeds 30 million won ($26,000) more than the original price. 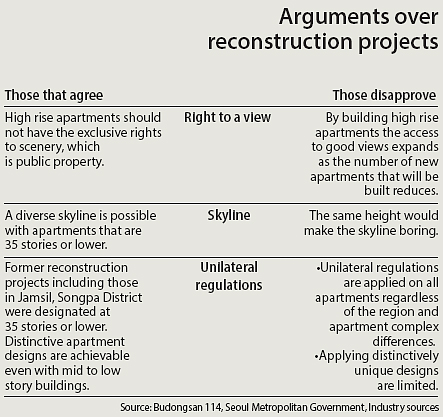 The upcoming lift on this suspension has been the driving force pushing reconstruction projects to speed up.

“While the reconstruction projects are trying to speed up, the Seoul government is signaling that it will not yielding to the 35-story regulation, which happens to be the biggest obstacle,” said Kim Tae-seop, head of urban policy at Korea Housing Institute.

With the deadline set, some of the reconstruction projects have revised their plans. Sin Banpo 3 Cha apartment in Seocho District has lowered its previous plan of building a 45 story apartment building to 35. It passed the government evaluation in May.

The Hanshin apartment and Jugong 1 Danji complexes in Seocho District also lowered their buildings to 35 stories high and passed the government review as well.

“In order to speed up the project as fast as we can, we have decided to accept the demands of the Seoul government,” said Kim Yong-deuk, who heads the apartment owners’ union representative for the Sin Banpo 3 Cha redevelopment project.

However, some are trying to find alternative plans that have been dismissed by the government.

Jugong 5 Danji apartment complex in Jamsil, southern Seoul, has proposed of building 15 floor buildings by the Han River, but asked for some other apartment buildings to be 50 stories high. This was not accepted by the government.

“Expectations that the apartment will be able to break through the government regulations and get final approval this year have been dropped among the apartment owners,” said a realtor in Jamsil, who requested anonymity. As a result, the 76 square-meter (818 square-foot) apartment that was being sold for 1.54 billion won in May has dropped to 1.48 billion won.

According to Seoul government official Yang Yong-taek, the 35 story regulation was first made by then Seoul mayor Oh Se-hoon, who collected the opinions of experts and the public on what should be the maximum height allowed for apartment complexes as one of his major projects in expanding public access to the Han River.

The Seoul government is arguing that in order to secure the public’s right to view the Han River and to protect the scenery of the city, apartment buildings must be regulated.

The publication cited that while skyscrapers are allowed in commercial areas in New York such as Manhattan, the public housing in residential areas such as the Bronx has its height limited to 14 stories high.

Critics of the Seoul government’s position argue that limiting the height unilaterally will destroy the skyline and the overall city’s appearance.

Kim Seung-bae, CEO of Fides Development, argues that no other major city - including New York, London or Tokyo - has a limit to how tall buildings can be.