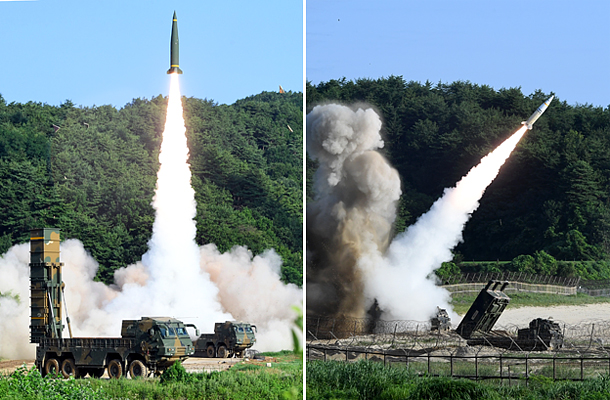 North Korea’s leader said Wednesday he had no intention of discussing his nuclear weapons or ballistic missile programs “unless the U.S. hostile policy and nuclear threat” to his country are “definitely terminated,” fueling tensions after Pyongyang conducted an intercontinental ballistic missile (ICBM) test Tuesday that it claimed succeeded.

Leader Kim Jong-un, who personally supervised the ICBM test Tuesday morning, was quoted by the regime’s state-run Korean Central News Agency (KCNA) Wednesday as saying that the “protracted showdown with the U.S. imperialists has reached its final phase” and that the time has arrived for the North to “demonstrate its mettle to the U.S.”

Calling the ICBM launch a “package of gifts” to Americans for their celebration of Independence Day on July 4, Kim reportedly bragged that the missile was capable of striking the U.S. mainland.

U.S. Secretary of State Rex Tillerson confirmed that the missile was an ICBM in a statement issued by the State Department in Washington Tuesday, saying his country “strongly condemns” the missile launch and that the testing of an ICBM “represents a new escalation of the threat to the United States, our allies and partners, the region and the world.”

South Korea’s Ministry of National Defense followed up on Tillerson’s statement hours later, announcing Wednesday that the missile was a “new type” of ICBM, apparently a Hwasong-12 intermediate-range ballistic missile (IRBM), also known as a KN-17, modified into a two-stage projectile.

But the ministry fell short of saying whether North Korea’s ICBM launch was successful, saying it was hard to confirm yet. Analysis of whether Pyongyang has perfected re-entry technology, a core part of a long-range missile that’s been considered the last hurdle for North Korea’s ICBM development, was still ongoing, according to Defense Minister Han Min-koo, who briefed lawmakers on the National Assembly’s National Defense Committee Wednesday. Han said the Hwasong-14, North Korea’s name for its ICBM, qualified to be an ICBM when considering its travel distance, but that the maximum speed was way below the threshold of Mach 20.

On why North Korea chose Tuesday for the ICBM launch, Han said it could have been happenstance or a thumbing of the nose at America on its Independence Day and shortly after a summit between South Korea and the United States, at which the leaders agreed to bolster their alliance for a “complete, verifiable and irreversible denuclearization of the Korean Peninsula.”

Han said Pyongyang was trying to seek the upper hand in relations with both Seoul and Washington, and attempting to impact their North Korea policies.

The minister also warned of a sixth nuclear test, saying the North’s Punggye-ri nuclear test site in North Hamgyong Province seemed to be prepared for a detonation at “any time.”

“It’s hard to affirm” whether North Korea will push through with a nuclear test, said Han, but “there’s a high possibility the country will because its national goal is set upon fulfilling military force through nuclear and missile weapons.”

In his statement Tuesday, Tillerson called on other countries to take firm action against the North Korean regime, saying, “Any country that hosts North Korean guest workers, provides any economic or military benefits or fails to fully implement UN Security Council resolutions is aiding and abetting a dangerous regime.”

Tillerson stressed Washington seeks only the “peaceful denuclearization” of the Korean Peninsula and that it will “never accept” a nuclear-armed North Korea.

The UN Security Council said an urgent meeting on the ICBM test will be held Wednesday in New York. An official who spoke on background said the group was likely to adopt a joint statement condemning North Korea’s missile launch and draft wider sanctions on the regime.

A series of UN Security Council resolutions ban the regime from testing or developing nuclear weapons and missiles.

North Korea claimed through the KCNA Wednesday that the Hwasong-14 was capable of carrying a “large-sized heavy nuclear warhead,” adding the launch had successfully tested atmospheric re-entry technology.

An ICBM requires a re-entry vehicle to withstand the intense heat when it arcs through space and reenters the atmosphere.

Local and U.S. military experts have been skeptical that North Korea actually has this technology.

“The inner temperature of the warhead tip was maintained at 25 to 45 degrees centigrade [77 to 113 degrees Fahrenheit] despite the harsh atmospheric re-entry conditions of having to face the heat reaching thousands of degrees,” KCNA reported in English.

The re-entry vehicle successfully protected the nuclear warhead from extreme vibration as well, enabling it to accurately hit the targeted waters without any structural breakdown at the end of its flight, the KCNA report continued.

The training was said to have been directly ordered by South Korean President Moon Jae-in, who proposed the idea to U.S. President Donald Trump through their national security adviser, according to Yoon Young-chan, senior presidential public affairs secretary.

Trump agreed to it.

A joint exercise between the South Korean Navy and Air Force was scheduled to be held today, as well as a South Korean-U.S. anti-terror drill against North Korean threats.

In a combined statement, Gen. Vincent K. Brooks, commander of the combined forces command, and Gen. Lee Sun-jin, chairman of the South Korean Joint Chiefs of Staff, said the allies were “maintaining peace and self-restraint” despite North Korea’s repeated provocations, and that they “may make resolute decisions any time if the alliance commanders in chief order.

“Whoever thinks differently is making a serious misjudgment,” the statement read.

Blue House aides said Wednesday that Moon, who left for Germany that day to attend a Group of 20 Summit, revised a speech he will give at the Koeber Foundation in Berlin, through which he initially planned to promote a new road map for uniting the two Koreas.

Moon was expected to stress the importance of civic exchanges and cooperation between the two Koreas based on mutual dialogue, citing the example of German reunification.

He decided after the ICBM launch to alter the speech to urge world powers to “act in a unified way against North Korean nuclear and missile provocations,” said Blue House officials.

But a South Korean government official who spoke on the condition of anonymity told the JoongAng Ilbo that Moon’s two-track approach to the North, which calls for denuclearization while promoting dialogue and exchanges in the private sector level, was being maintained.

“The former Lee Myung-bak and Park Geun-hye administrations isolated North Korea and added sanctions to the regime after it carried out nuclear tests and launched missiles,” said the source, “but all of those measures resulted in the North’s acceleration of its weapons program.”

The official stressed the necessity of inter-Korean dialogue in order to halt Pyongyang’s military drive.