Learning from the past

Learning from the past 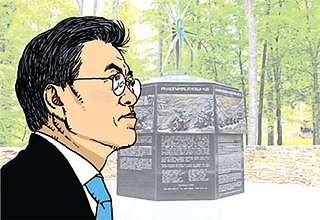 The free trade agreement between South Korea and the United States has a tumultuous history. The pact was the brainchild of former liberal president Roh Moo-hyun. The agreement was finally struck in April 2007 during his term. He described it as a “sure win.” The FTA finally came into effect under his conservative successor Lee Myung-bak in March 2012.

Protests over the pact were violent. Roh’s rural support base and unions were outraged. Plenty of Roh supporters vehemently opposed the agreement. They went so far as to claim that his legacy would be one of betrayal and humiliation for the country, on the scale of submission to Japanese colonial rule.

Now the FTA drama continues. After the first summit meeting between Presidents Moon Jae-in and Donald Trump, the U.S. president brought up the issue suddenly in their joint press conference, dubbing it a “rough deal.” Trump’s disapproval of the FTA is nothing new. He accused it of killing U.S. jobs and being disastrous for U.S. interests.

Moon, who was previously Roh’s chief of staff, defended it as much as he could. Citing data, Moon said that the deal has been beneficial to both countries, and he contested the need for a renegotiation. But Trump was not easily convinced. What had once been touted as one of Roh’s greatest accomplishments has backfired. The curse of the past lives on.

I wonder what critics of the FTA are thinking now. They argued the Korean economy would be invaded by Americans products because of the deal. But Korean enterprises proved to be smart. They used the deal in a way that it would become the “sure win” Roh had predicted. Roh’s loyalists will have to admit they were wrong. But they keep silent. They want to hide their ignorance and miscalculation. Many of them are still associated with the ruling Democratic Party and counted among the loyalists of Moon.

Moon’s debut in Washington was stunning. Upon arrival in the United States, he went straight to the Chosin Few Battle Monument at the National Museum of the Marine Corps in Quantico, Virginia. He said he would not be here today if not for the American marines who fought against the Chinese in the brutal sub-zero climate of the 1950 Battle of Chosin Reservoir and helped Moon’s parents evacuate from North Korea among hundreds of thousands of refugees.

Such emotional rhetoric can only come from Moon. The Chosin battle was dubbed one of the worst, but also the greatest evacuation in U.S. war history. Chosin — Jangjin in Korean — is a lake in South Hamkyong Province in North Korea.

In November 1950, the 1st Marine Division and United Nations troops (later called The Chosin Few) faced a surprise attack by 120,000 Chinese soldiers. The fight lasted for 17 days. The troops led by the marines were able to make a withdrawal at the Hungnam port on the east coast. An armada of 193 ships was assembled at the port to evacuate not only the surviving troops but also over 10,000 refugees fleeing North Korea. The ship Meredith Victory held a couple who would later have a son, Moon Jae-in.

A monument to commemorate the great battle was championed by then-Minister of Patriots and Veterans Affairs Park Sung-choon. When a 300 million won ($259,336) budget was slashed by the National Assembly’s committee on state affairs in 2014, Park rushed to the chairman’s office to protest. He was scorned by lawmakers for throwing a tantrum. The budget cuts were led by the opposition, the current ruling Democratic Party. The ruling party at the time, the Saenuri Party, was lazy and cowardly in defending its supposedly conservative values.

Park was dismissed by Moon’s administration for his role in banning the pro-democracy anthem “A March of the Beloved” at the state-administered May 18 Gwangju Democratization Movement ceremony. But the die-hard conservative minister ended up setting the stage for an impressive debut by Moon on the international stage.

Trump showed his Korean visitor his private place, the Treaty Room, on the third floor of the White House. The room was where the United States and Spain signed their historical peace treaty in August 1898. A painting capturing the historic moment hangs in the room. A war between the two countries had broken out in the aftermath of an explosion on the USS Maine in Havana Harbor in Cuba. The sinking of the ship during the Cuban revolt against Spain became a catalyst for the United States’ war with Spain. The U.S. Marines’ investigation of the cause of the explosion remains a subject of speculation and suspicion. Yet the painting stayed during the refurbishing of the room by John F. Kennedy in the 1960s. U.S. presidents value history’s twists and turns.

History does not move in a straight line. It sometimes backtracks when faced with paradoxical upheavals. A skilled statesman would make use of contradictory challenges to his or her favor. Such craftsmanship would come from a sense of balance in historical views.

A leader must learn from the past — both achievements and failures. American presidents are usually groomed to have respect for such tradition. Chinese leaders also borrow wisdom from the past. Moon must build his own sense of balance by learning from both conservative and liberal presidents in our own brief history as a state.