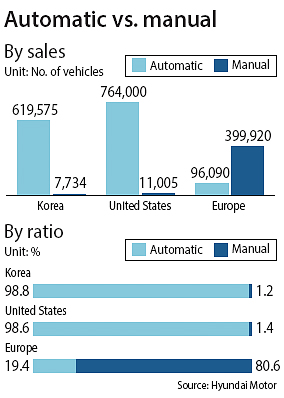 Driving a car with a manual transmission may seem more difficult than an automatic, but any veteran driver knows that it has its advantages. For one thing, a stick shift comes with a much lower price tag - as much as 1 million won ($867) cheaper - and better mileage.

Despite such perks, vehicles with a manual transmission have been in steady decline in Korea and are at the verge of complete extinction.

Korea’s largest automaker Hyundai Motor sold 627,309 passenger vehicles in the domestic market last year, excluding buses and commercial vehicles. Of those, only 7,734 had a manual transmission, just 1.2 percent of sales.

As stick shift sales continue to fall, some speculate that less than one out of every 100 vehicles that Hyundai sells this year will be manual.

And it isn’t just Hyundai that’s struggling to shift cars with a manual transmission.

For SsangYong Motor, a sports utility vehicle maker and the Korean unit of Indian auto giant Mahindra & Mahindra, stick shifts took up less than 0.5 percent of sales last year. So far this year the company has sold less than 200 cars with a manual transmission.

Renault Samsung Motors no longer releases any cars with a manual gearbox. GM Korea is about the only car maker in Korea still experiencing steady sales. Fifteen percent of Chevrolet Sparks sold last year had a manual transmission, although this trend does not continue across their range.

While Koreans are turning their backs on manual cars, Europeans still welcome them with open arms.

According to PricewaterhouseCoopers, a global auditing and consulting firm, nearly 11.92 million cars with a manual transmission were sold in Europe in 2015, nearly four times the number of automatics sold, which stood at about 3.12 million units.

One of the key reasons behind the disappearance of stick shifts from Korean roads is the driving conditions here. In urban settings such as downtown Seoul, the roads are often heavily congested and drivers have to repeatedly stop their vehicles. Outside the cities, Korea’s hilly terrain also makes it difficult for inexperienced drivers to handle a manual gearbox.

Meanwhile, the technology that goes into automatic transmissions has improved over the years, making some nearly as fuel efficient as the manual alternative in certain environments, such as city driving.

Even when the fuel economy and vehicle price disparities are eliminated, however, some experts say that driving a car with a manual transmission - which involves using the clutch, accelerator and gear stick simultaneously - ensures safer driving by increasing the level of concentration required.

Some experts even claim driving manual vehicles may be the solution to the recent rise in accidents involving elderly drivers. A study conducted by a Japanese university showed that the probability for automatic cars to get into accidents in certain settings is nearly twice as high as the manual alternative.

Still, Korea may have missed its chance to bring back manual transmissions. The fall in demand over the past few years has made it nearly impossible to find vehicles with a manual transmission anymore. Out of 21 Hyundai models - excluding commercial vehicles - only six come with a stick shift. Sister company Kia Motors similarly only offers six models.

An official from the Korea Automobile Manufacturers Association explained, “after the emergence of automatic transmissions, the demand for manual transmissions fell drastically.”

“Although we understand that some consumers want manual transmissions back on the road, it’s a difficult decision for manufacturers to increase the number of [manual] options again when it’s more favorable for them to simplify production,” the official added.