Moon gets nod from Xi on North

Moon gets nod from Xi on North 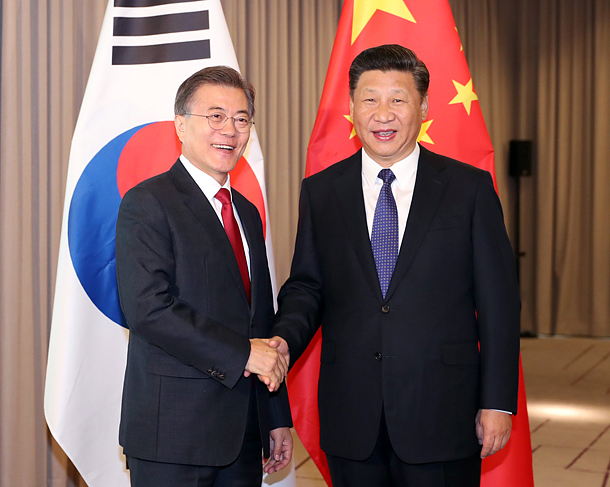 In his first summit with Chinese President Xi Jinping on Thursday, President Moon Jae-in won the support of Beijing, Pyongyang’s main ally, to resume talks with North Korea to improve inter-Korean relations and resolve the security crisis prompted by its nuclear and missile tests.

Moon and Xi met in Berlin before heading to Hamburg to attend a Group of 20 Summit Thursday and Friday. It was the leaders’ first meeting since Moon was elected in May in a snap election. Moon met with U.S. President Donald Trump last week and won his apparent support for his North Korea policy. That was before Pyongyang tested a new, long range missile Tuesday.

The Korea-China summit came as Washington reeled at the test of a rocket the Pentagon considers an intercontinental ballistic missile (ICBM). Moon had said earlier he would seek Xi’s support to pressure Pyongyang to stop its provocations.

According to a Chinese statement on the summit, Xi said problems concerning the Korean Peninsula must be resolved through dialogue. He then expressed support for Moon’s initiatives toward the North.

The thorny issue of the U.S. military’s deployment of an advanced antimissile system in Korea was also discussed at the summit, according to the statement released by Chinese state-run media. The summit was initially scheduled for 40 minutes, but Moon and Xi talked for 70 minutes, indicating an intense discussion on sensitive issues.

The U.S. deployment of the Terminal High Altitude Area Defense (Thaad) system in Korea has been fiercely protested by China and Russia. The two countries say the system’s powerful radar is a threat to their national security. Their latest protest was made earlier this week when Xi met with Russian President Vladimir Putin in Russia.

Key components of a Thaad battery, including an X-band radar system and two missile launchers, were installed in Seongju, North Gyeongsang, on April 26 - less than two weeks before the May 9 election that brought Moon to power. Moon recently ordered an environmental impact study, effectively stalling the deployment for the time being, but also vowed during his trip to the United States last week that he won’t reverse the deployment.

“Korea-China relations are facing a predicament, but we do not want to see this,” Xi was quoted as telling Moon. “The two countries must respect each other’s core interests and matters of grave concerns.”

The statement said Xi asked Moon to seriously consider China’s concerns and handle the problem properly and fairly. “I hope the obstacle for improving and advancing Korea-China relations will be removed,” Xi was quoted as saying. It was apparent that the obstacle referred to Thaad.

At the beginning of the summit, Moon stressed the importance of Korea-China relations and expressed his hope to further develop the 25-year-old diplomatic ties.

“Korea and China have an incredibly important cooperative relationship for the denuclearization of North Korea and establishment of a peace regime on the Korean Peninsula, in addition to economic issues,” Moon said in his summit with Xi. “I value the relations with China.” At the beginning of the summit, Xi also said he wants to exchange opinions with Moon on matters of grave importance. “We must communicate candidly and improve understanding through the talks,” he said. “We should put efforts together to improve the bilateral relations and protect the peaceful development of the region.”

Following the summit, Moon was scheduled to give a speech at the Koerber Foundation and leave for Hamburg, where he will attend the G-20 summit on Thursday and Friday. On the sidelines, Moon will have a bilateral summit with Japanese Prime Minister Shinzo Abe and a trilateral dinner with Abe and U.S. President Donald Trump. Moon will also meet with Russian President Vladimir Putin.