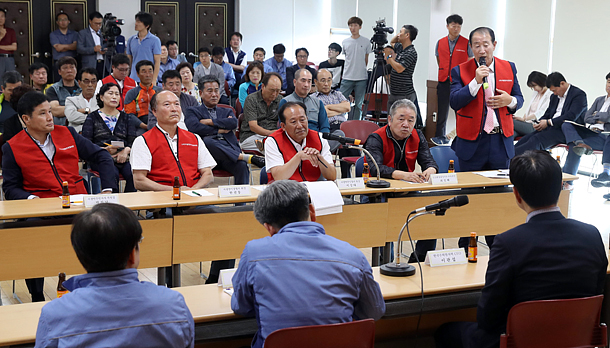 Residents of Ulju County, Ulsan, argue that the construction of the Shin Kori 5 and 6 nuclear reactors should not be suspended at a meeting with executives of Korea Hydro & Nuclear Power Corporation on July 3. [YONHAP]

There should be no one in Korea who opposes a phasing out of the use of nuclear power if a national consensus is formed on alternatives and how it affects industry, national security and electricity prices is discussed thoroughly and openly. It’s not something that should cause conflict. It’s certainly not something that academia will oppose en masse. So why is the Moon Jae-in administration in such a hurry? Hastiness prompts both misunderstandings and speculation of hidden agendas.

Why did the government stop the construction of the Shin Kori 5 and 6 reactors — and only then ask for a public discussion on the issue? Why can’t such a discussion take place while construction is ongoing? Is it appropriate to decide the fates of the reactors based on a public opinion survey, which will take three months? Why did the government exclude experts from the public opinion survey committee?

The answer is that the administration already decided on the nuclear phase-out and is now trying to find support for its plan. Of course, a contentious issue needs a strong push at the start of a presidency, when the president is in the honeymoon phase. Professor Paik Un-kyu, who came up with Moon’s presidential promise to phase-out the use of nuclear energy, was appointed minister of trade, industry and energy. The Donald Trump administration’s demand for a renegotiation of the Korea-U.S. free trade agreement has become a major challenge of the administration. Paik was made trade minister despite the fact he has no background in trade. Many people say he got the job purely to help phase out nuclear power.

The Blue House gave an ambiguous answer about its unholy rush. “The more we continue the construction, the larger the costs sunk into the project will be,” said Kim Su-hyun, senior secretary for social affairs. “Even if we stop the construction now, the cost is 2.6 trillion won ($2.25 billion).”

It was unclear why the social affairs senior secretary was handling the nuclear plants issue. Normally that would be the job of Blue House aides in charge of economic, industrial and security affairs.

There are so many questions about the policy, including about the public opinion survey. This must be a proper survey. A public opinion poll should be taken first and the experts’ opinions on contentious issues must also be provided. Then, a second public opinion poll should take place to see if the public changed its mind. Through this process, we can come to some kind of public consensus. It should be an opportunity to clear up people’s misunderstandings of nuclear power plants. To this end, we need several preconditions.

Park Jin, a professor at the Korea Development Institute, is one of the nation’s top scholars in public policy and management. He offers the following proposal.

First, the advisory committee must be formed of members who have core interests in the issue. They should include environmental groups in favor of the nuclear phase-out, nuclear engineering professors and residents of areas where nuclear power plants operate. A separate advisory panel also needs to be selected, and experts must be drafted to advise it.

Second, the process must not be handled emotionally. Experts who provide advice to the advisory panel must have not only academic and professional expertise, but also communication abilities. For the survey, an ability to explain well is as important as knowing the subject. People who are known partisans should be excluded from the process.

Third, the advisory panel must be selected based on genuine demographics. The government plans to include more youngsters and that is possible, because the risks presented by nuclear plants is an issue for future generations. But young people cannot comprise more than 10 percent. Regions are also a key. About 200 members each for Seoul, Gyeonggi, Chungcheong, Gyeongsang and Jeolla, or a total of 1,000 to 1,200 people, can give an opinion that represents the entire nation.

Four, the public survey is an opinion poll that should be referred to when making a decision. Unless an overwhelming number of people support a change, the status quo should be maintained.

The phasing out of nuclear power is an issue that could determine whether Korea succeeds or fails in the next century. If the public survey outcome is ambiguous, we may need to hold a nationwide referendum. The issue is important enough for that.