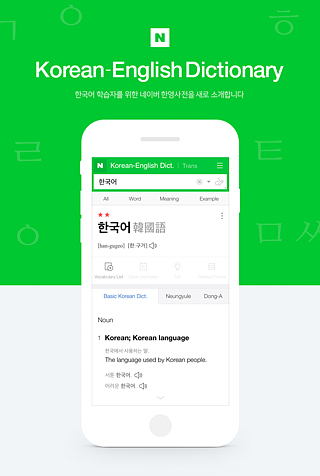 It is the third foreign-language dictionary released by Naver after Korean-Chinese and Korean-Vietnamese. The dictionaries contain content and features catered to students learning Korean.

For users unfamiliar with the Korean keyboard, they can look up words by speaking them, taking pictures of them or writing them by hand. Educational content includes a webpage with colloquial expressions and tips on grammar points such as honorifics.

“Interest in the Korean language is high with the PyeongChang Winter Olympics ahead,” said Kim Jong-whan, leader of Naver’s dictionary team. He noted that the Korean-Vietnamese dictionary was viewed 1.5 times more than the dictionary for Koreans last year.

Naver plans to expand its dictionary service to 11 languages in the future, including Spanish and Indonesian.