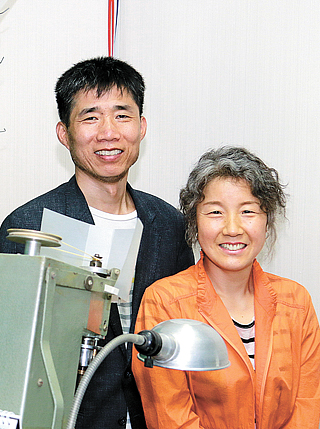 A 52-year-old key mechanic named Shin Ki-hwan, who worked over 20 years in a 6.6-square-meter (71-square-foot) shop in Kyungil University in North Gyeongsang, recently decided to donate all his money to the school.

“If not for the kindness of Kyungil University,” he says, “I couldn’t have been able to enjoy such happiness as a disabled person.”

Donator Shin is deaf and has a speech disorder. He speaks in sign language.

“All I have is a small house that I live in,” he signs, “but I want to donate all my money to the school.”

Shin started working at the university in 1994, when the school moved from Daegu to the town of Gyeongsan in North Gyeongsang. Before moving into a student hall, Shin had been going around places in town to polish or fix shoes. Then one day, a university staff member spotted Shin and suggested he go to the school.

The university allowed Shin to set up a small shop inside the school for free and made keys and stamps there.

Shin’s wife, Song Chun-yeon, who is also deaf and has a speech disorder, was fully supportive of Shin’s idea to donate. They do not have children. The couple promised to donate their home and Shin is also giving away the 180 square meters of land he owns. The appraised value of the house and the land amounts to 136 million won ($109,140).

“I decided to donate the money in the hopes that students at Kyungil University become key figures in society,” says Shin, “as people say youth unemployment is a big problem.”

The university recently completed the donating process according to Shin’s request. However, Shin’s family will still be allowed to live there as long as they wish.

From September, Kyungil University is establishing a new scholarship named after Shin. The scholarship fund starts with the 136 million won he is providing and the school will collect other donations to expand the size of the fund. Also, the university decided to provide Shin and Song free health checkups every year. In February, the school will also reward Shin with an honorary degree in social welfare. In the main lobby of the university, Shin’s name is already carved on the nameplate for honorary donors.

According to the university, it plans to support Shin and Song for the rest of their lives.

“It’s one of the university’s responsibilities to look after disadvantaged groups, including people living with disabilities,” said Chung Hyun-tae, president of Kyungil University. “I appreciate the great kindness of Shin’s family and will use all the donated funds for our students only as Shin wished.”