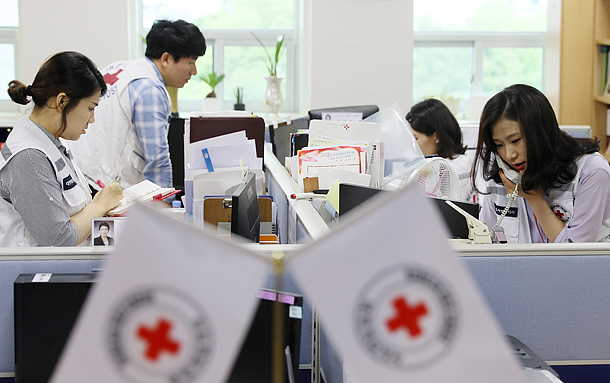 Officials from the inter-Korean cooperation team of the Korean Red Cross in Seoul work busily on Friday as President Moon Jae-in proposed holding a family reunion on Oct. 4 with North Korea. [YONHAP]

President Moon Jae-in proposed that the two Koreas “mutually halt acts of hostility” along their borders on July 27, the anniversary of the armistice treaty that ended the 1950-53 Korean War, a step toward his initiative to reopen dialogue with the North.

“July 27 this year marks the 64th anniversary of the armistice agreement,” Moon said in an address Thursday at the Koerber Foundation at Altes Stadthaus, Berlin’s old city hall. “If the two Koreas, starting this day, stop all acts of hostility that escalate military tension on the military demarcation line (MDL), it will provide a meaningful opportunity to ease tensions between the two Koreas.”

He said, “Even at this moment, a war without gunfire continues along the MDL on the Korean Peninsula, a situation that increases the danger of an armed conflict between the two Koreas.”

The proposal is part of Moon’s larger vision of getting Pyongyang to return to dialogue through a halt of its provocations.

South Korea’s Ministry of Unification said on Friday that it is in the process of reviewing plans to propose military and Red Cross talks with the North to follow up on Moon’s offer as well as his suggestion to hold a reunion for war-torn families in the fall.

Moon outlined both these plans in his address in Berlin, where late South Korean President Kim Dae-jung issued a key declaration in March 2000, laying the foundation for his historic first inter-Korean summit that June with Pyongyang’s then-leader Kim Jong-il.

Moon noted in this speech that “the basic conditions have been met to restart the Korean Peninsula peace process, which had been halted,” saying he recently reached a consensus with U.S. President Donald Trump and Chinese President Xi Jinping to reopen inter-Korean dialogue.

Though emphasizing his disappointment in the North for its continued nuclear and missile provocations, Moon also said he will continue to pursue nonpolitical, humanitarian and sports exchanges and cooperation projects, separating them from the political and military situation. This included an offer to hold a reunion of families on Oct. 4, Korea’s Chuseok holiday and the 10th anniversary of the second inter-Korean summit in 2007 under former President Roh Moo-hyun.

“We are taking follow-up measures in order to implement the many tasks between North and South Korea proposed by the president,” said Lee Eugene, a deputy spokesperson of the Unification Ministry in a briefing in Seoul Friday. She added that the government is working to carry through with Moon’s initiative to resolve Pyongyang’s nuclear issue and improve inter-Korean relations through communicating with the public, ruling and opposition parties, as well as the United States and other related countries.

Lee added, “Because of a state of military escalation at the demarcation line, there is a heightened threat of an armed conflict between the North and South, which threatens the safety of the residents along the border.”

She also said Moon’s proposal for a halt of hostile acts reflects a “need to mutually ease military tensions and build up trust.”

While the term “hostile acts” generally refer to military activities, analysts point out this proposal could also cover the dissemination of propaganda leaflets by both sides over the border, as well as propaganda broadcasts, and could lead to the revival of the inter-Korean military hotline, which has been cut off.

In January 2016, South Korea resumed its loudspeaker announcements at the borders, which broadcast propaganda and K-pop music, following Pyongyang’s fourth nuclear test on Jan. 6 that year. North Korea responded by switching on its loudspeakers, as well. South Korea’s giant loudspeakers have a range of about 10 kilometers (6.2 miles) and are more effective than North Korea’s speakers, which have a range of less than three kilometers and are barely audible across the border.

North Korea has yet to respond to Moon’s proposal.