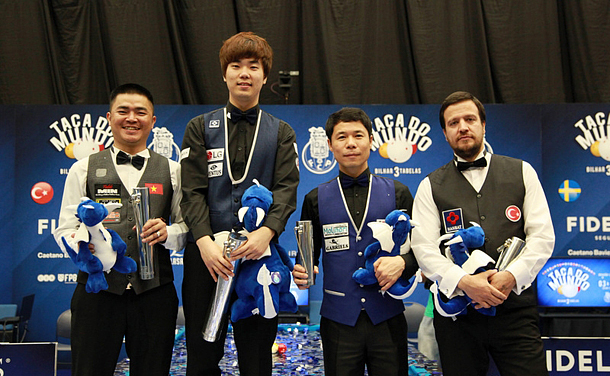 Kim Haeng-jik, second from left, stands on the podium after winning the 2017 Three-cushion World Cup in Porto, Portugal on Sunday. With the victory, Kim defeated Quoc Nguyen of Vietnam 40-34 in the final match to capture his very first senior title in an international event. [YONHAP]

Kim, who is the ninth ranked three-cushion player in the world, concluded the match in the 23rd set, to win 40-34 against Nguyen, ranked 14th. With a win, Kim became the sixth Korean to win the World Cup, which is played about six times every year with 148 players competing for the title.

Three-cushion billiards is a form of professional billiards where a point is scored for each successful carom, strike or a rebound. A carom is when the cue ball successfully strikes two object balls. The player that scores the first 40 points wins. To be counted as a point, the cue ball has to contact three or more cushions make contact with two balls.

From the first set, Kim scored nine points and had a big 17-3 lead against Nguyen. However, Nguyen chased after Kim to take the lead 20-18, but that didn’t last long, as Kim scored 14 points from the tenth to the 15th sets to take the lead to 32-24.

Kim finally scored the last point in the 23rd set to conclude the match.

Prior to the final match, Kim competed against Carlos Crespo of Spain in the round of 32, Sameh Sidhom of Egypt in the round of 16, Choi Wan-young in the quarterfinals and Lutfi Cenet of Turkey in the semi finals.

Billiards is a sport where players tend to gain experience in their 20s and become top player mostly in their 30s, but Kim belied tradition as he took the World Cup title at only 25.

“Haeng-jik grabbed the cue for the first time at age three, when I managed a billiard-room in Iksan, North Jeolla” said Kim’s father. “And in eight grade, he won the national billiards championship.”

Kim continued his success during his junior career while attending Maetan High School. In 2007, Kim won his first World Junior Championship in Los Alcazares, Spain and from 2010, he defended his title for three consecutive years.

In 2011, Kim joined BF Horster-Eck, an elite team with Torbjorn Blomdahl of Sweden, but two years later he had to return to Korea to complete his military duty. He returned to win the Asian Championship in January 2015, becoming the youngest three-cushion player to be ranked no. 1 in Korea.

Along with Kim’s first World Cup title, Kim’s world ranking moved up from ninth to sixth.