Abuse of franchisees gets attention of FTC

Abuse of franchisees gets attention of FTC 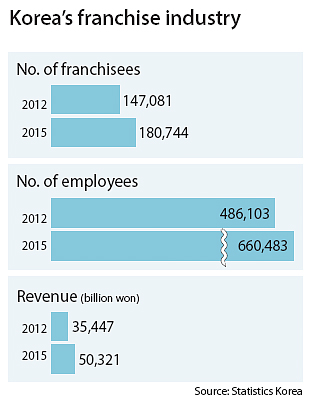 The revelations of predatory business practices by Mr. Pizza CEO Jung Woo-hyun last month has put a spotlight on the gapjil culture in Korea’s franchise businesses. Gapjil refers to abuse of power by someone in a dominant position in a business relationship.

It turns out, Mr. Pizza wasn’t the only company that treated franchisees badly. And the Fair Trade Commission says it plans to tighten regulations to crack down on the abuses.

Pizza Etang, a pizza franchise with some 300 outlets in Korea, discreetly lowered the price of cheese being supplied to its stores by 6.2 percent after Jung was accused of gouging his small store owners on cheese prices.

On Tuesday evening, Pizza Etang sent an email saying the cost of 10 kilograms of cheese would be lowered from 95,000 won ($82.54) to 89,430 won. It said it wanted to improve its “coexistence with the franchisees.”

But there was more to the story.

Suppliers to Pizza Etang stores were run by the relatives of company CEO Gong Jae-ki - an echo of the Mr. Pizza case.

Hwang Soon-ok, Gong’s wife, operates a fresh food logistics company, Alldam FS. Gong’s daughter Gong Jung-ye runs a dough manufacturing company, Hestech. Both are registered as suppliers to Pizza Etang. In fact, franchisees owners were given no choice but to use Alldam FS and to buy Hestech’s dough.

“The cost of raw ingredients is very high because the suppliers are all relatives of the franchise owner and they want to take extra profit,” said Kang Sung-won, head of the Pizza Etang franchise association. “Shrimp, for example, can be bought at local market at 39,000 won but it is mandatory for us to buy it through the franchise supplier, so we pay 70,000 won for the same shrimp.”

Korea’s franchise industry took off during the Asian financial crisis in 1997, a boon to many middle-aged fathers who were kicked out of jobs at big companies at the time.

While franchising has become a second career for many retired and jobless people, a dark side known as gapjil surfaced.

The franchisor takes advantage of its higher position to force franchisees to purchase supplies from designated companies at high prices or renovate the stores with materials and interior designs from companies linked to the headquarters.

Sometimes, it would retaliate against a franchisee who started a new business.

Jung, CEO of Mr. Pizza, was prosecuted last week for allegedly taking improper profits of 10 billion won by forcing franchisees to purchase cheese at an expensive price from a supplier that later was run by a close relative.

Korea’s franchise industry grew at a rapid pace but hasn’t matured, said Lee Yong-ki, a business professor at Sejong University who is also head of the Korean Society for Franchise Management.

“There is no regulation on royalty fees in Korea,” he said. “In many Western countries, franchisees have to pay certain royalty to the franchisor in return for receiving education about the business, know-how and other stuff.

Since there are no such regulations in Korea, franchisors have an opportunity to take improper profits and franchisees can’t complain.”

Lee said the current crisis can’t be wholly blamed on the franchisors because franchisees don’t always follow the franchise manuals.

“In order to start a franchise business, it is mandatory to buy certain supplies from designated companies. But I hear some of them don’t buy at the designated places,” he said.

The FTC said it will renew regulations related to franchises in the latter half of the year. It will consider making it mandatory for franchisors to disclose detailed information such as price of the products franchisees have to get sourced in a particular way. Currently, only a product list is required for disclosure, not prices.

The FTC’s new head, Kim Sang-jo, announced in May that solving “franchise gapjil” will be his priority for this year.