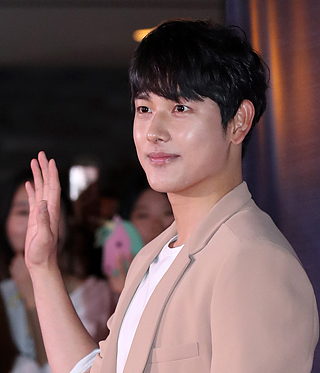 Singer-turned-actor Im Si-wan, better known by his stage name, Siwan, started his mandatory military service after enlisting at a recruit training center in Yangju, Gyeonggi, to much fanfare on Tuesday.

To show fans his appreciation, he met them in a small restaurant sporting a newly shaved head, the customary hairstyle for those entering the military. Around a hundred local and foreign fans waved goodbye as Im bid adieu to the spotlight for the next 21 months. He is set to be discharged from his service in May 2019.

During the short fan meeting, Im said, “Enlisting feels like I’ve finally completed an overdue homework assignment.” When fans quizzed him about what members of his former boy group Ze:A had to say, he replied, “Hwang Kwang-hee [who began his own service on March 13] said, ‘come back safely.’” After the interview, Im left for the recruit training center, where he will prepare for five weeks before being assigned an army position.

Im debuted in 2010 with Ze:A, which failed to reach the heights of the best boy groups. Instead, he made a name for himself acting, becoming one of Korea’s most sought-after stars after debuting with the 2012 MBC drama “Moon Embracing the Sun.” He went on to star in the 2015 hit drama “Misaeng,” and recently strode down the red carpet at the Cannes International Film Festival after his film “The Merciless” was invited. Im is the first boy group member to achieve such a feat.

Prior to his enlistment, the actor wrapped up filming for the upcoming pre-produced drama, “The King in Love,” on MBC. The drama’s first episode airs on July 17.