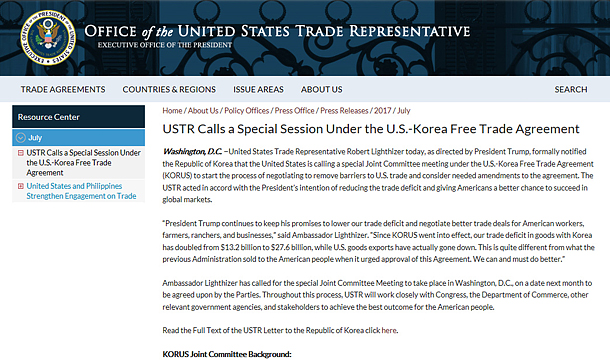 The Office of the United States Trade Representative’s website shows a press release calling for a “special session” meeting under the KORUS FTA. [YONHAP]

The Office of the United States Trade Representative sent a letter to the Korean government on Wednesday local time calling for a Joint Committee meeting to discuss revisions to the countries’ free trade agreement.

It didn’t use the term “renegotiation” but said it wants to consider changing the deal.

“I request the convening of a special session of the Joint Committee soon in Washington, D.C., to consider matters affecting the operation of the Agreement, including possible amendments and modifications,” U.S. Trade Representative Robert Lighthizer wrote in the letter delivered to the Korean embassy in Washington.

“I believe that this session and the follow-on negotiations will provide an opportunity to review progress on the implementation of the Agreement, resolve several problems regarding market access in Korea for U.S. exports, and, most importantly, address our significant trade imbalance.”

Lighthizer argued that the U.S trade deficit has doubled since the agreement began and that signifies an unbalanced trade relationship and unlevel playing field.

The agreement requires a special session of the joint committee to be held within 30 days of a request from either party.

Korea’s Ministry of Trade, Industry and Energy argued that the FTA is essential for U.S. companies and that the U.S. action was not totally unpredictable.

The ministry said it has been preparing for the every possible scenario.

“After the FTA went into effect, global trade volume dropped, while the two countries’ trade increased, and this shows the deal brought mutual benefits,” said Yeo Han-koo, Director General for International Trade Policy at the Ministry of Trade, Industry and Energy, at a press briefing held at the Sejong Government Complex on Thursday.

“This is why there are many from the U.S. business world who don’t want significant changes to the current deal,” he continued.

The ministry said it would like to delay the meeting since the post of chief trade negotiator for Korea is vacant due to the delay in appointments by the new administration of Moon Jae-in.

“The revision bill for the National Government Organization Act is still being discussed at the National Assembly and the government hasn’t appointed a chief trade negotiator because of it,” said Park Chan-ki, a director at the Korean Trade Ministry.

“We will dispatch senior officials to the United States and will discuss with our U.S. counterparts the details on and agenda and time frame.”

According to the Trade Ministry, Korea’s trade surplus with the United States was $11.6 billion in 2011, a year before the agreement went into effect in 2012. The figure rose to $23.2 billion last year.

During the same period, the USTR argues, the trade deficit more than doubled from $13.2 billion to $27.6 billion.

Korean and U.S. statistics on the trade deficit differ for a number of technical reasons.

Analysts believe the main complaint of the Donald Trump administration is over automobiles and steel.

“Korea’s automobile exports to the United States have been dropping but the United States still believes the sector is the main reason for the deficit,” said Cheong In-kyo, a professor of international trade at Inha University.

But some analysts believe the two countries won’t make wholesale changes to the agreement.

“We think there is a higher chance that the two countries will make some changes rather than renegotiating the whole agreement since Washington used terms like revision and modification instead of renegotiation,” said the Korea International Trade Association in a press release on Thursday.

“They might have chosen such words to ease concerns in industries and among lawmakers in both the United States and Korea, who support the trade agreement.”

Korea’s trade surplus with the United States has been going down since the Trump administration was launched earlier this year.

The trade surplus amounted to $8.16 billion during the first six months of the year, down 37.9 percent from the same period the previous year.

The Korean government believes that there is no specific evidence that the FTA has raised the U.S. trade deficit with Korea.

Heo Yoon, a professor of international trade at Sogang University, said the United States is asking for trade to be more balanced and that Korea should cooperate.

“We need to try to import more from the United States as long as it doesn’t result in distortions in the market,” said Heo.