Business environment too tough for start-ups

Business environment too tough for start-ups 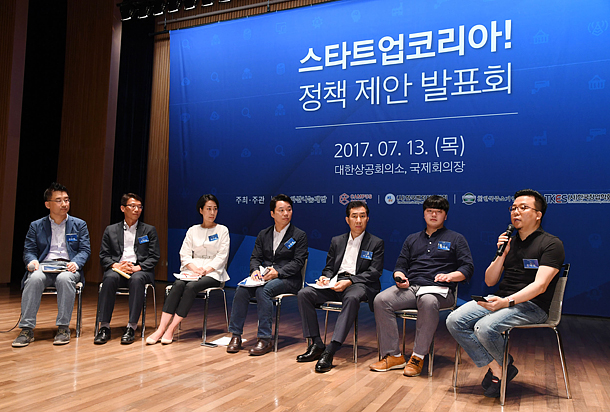 A panel discusses the growth of local startups at the Korea Chamber of Commerce and Industry in Jung District, central Seoul, where Google Campus Seoul and Asan Nanum Foundation released Thursday a report on the Korean startup scene. [GOOGLE KOREA]

Fifty-seven of the top 100 global start-ups would be restricted if they tried to do business in Korea, a report revealed Thursday.

The report, announced by Google Campus Seoul and the Asan Nanum Foundation at the Korea Chamber of Commerce and Industry in Jung District, central Seoul, found that the complicated and rigid process to acquire the government’s permission to conduct business made it hard for new businesses models and industries to legally operate. Another problem was that most current regulations were based on offline businesses.

Hey Car, an online platform for selling second-hand cars, closed operation because they didn’t have a parking lot and auction house that fit government rules. They restarted after negotiating with the government.

A suggested solution to this problem was setting exceptions on regulations with the long term goal of shifting policy direction to prohibit those that break rules rather than insisting on a long list of requirements.

One example of ways to do this is “appointed representative.” Under this program, government-approved companies offer representative authority to start-ups with innovative services to help them test products on consumers without acquiring government licenses.

Another obstacle in the Korean start-up scene was blocked access to data. Despite having the best data-related infrastructure in the world, public offices still kept valuable consumer data to themselves such as in law and medicine and among private companies, large enterprises were the only ones that had sufficient data as opposed to young start-ups.

The Korean start-up scene expanded in size with 96,000 companies having registered as new enterprises last year, compared to 65,000 in 2011. Despite the quantitative growth, the report pointed out that the qualitative development of start-ups had a long way to go.

On start-up investors, Korea’s amount of venture capital investment per GDP rapidly rose over the years to rank fifth globally, but 40 percent of the funding was from the government, meaning a relative shortage of private investors. Moreover, investment was bent towards IPO instead of M&A. Start-up founders that hand over their businesses via M&A can move on to build up new businesses which invigorate a virtuous cycle of investments.

A shortage of venture capitals was cited as another problem, for which the report suggested an ease of regulations in establishing such companies.