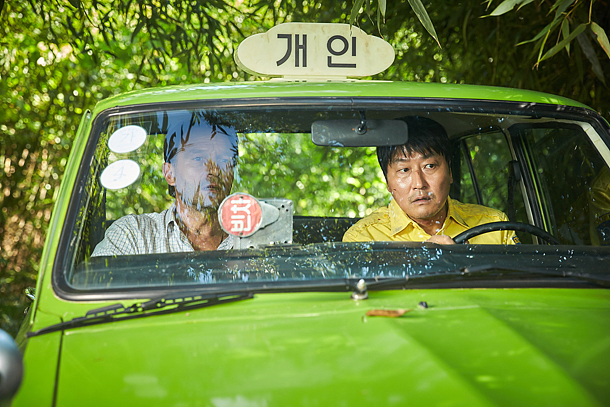 “A Taxi Driver,” set against the backdrop of the Gwangju democracy protests in May 1980, opens in theaters Aug. 2. [SHOWBOX]

The Gwangju uprising, a civil revolt against Korea’s military government in May 1980, is a perennial favorite of screenwriters. There’s “May 18,” a tearful drama from 2007 about two brothers caught in the middle of fighting between protesters and soldiers, and “26 Years,” an action thriller released in 2012 about a plot to assassinate one of the perpetrators of the civilian massacre.

Next month, another movie touching on the landmark moment in Korean history will be released. Directed by Jang Hun of “The Front Line” (2011), the upcoming film titled “A Taxi Driver” revolves around a hard up cab driver in Seoul named Kim Man-seop (Song Kang-ho) who takes an ambitious German reporter Jurgen Hinzpeter (Thomas Kretschmann) to Gwangju in the southwestern part of the country.

The film is based on the true story of Hinzpeter, who played an essential role in reporting on the Gwangju protests and the subsequent massacre that the military laid upon the city.

Actors Yoo Hai-jin and Ryu Jun-yeol also have roles in the film, playing respectively a warm-hearted taxi driver in Gwangju and a strong-willed university student fighting against the military government.

A short clip of an interview with Hinzpeter, who met with the film crew before he passed away last year, is included at the end of the movie.

“We dramatized the story based on historical facts,” Jang, the director, said during a press preview earlier this week. The characters in the movie, he said, were created from testimonies by Hinzpeter and Gwangju citizens.

“It’s a movie told from the perspectives of characters [instead of focusing on the uprising itself],” the director said. “[The taxi driver and German reporter] were ordinary people just like any of us, and I imagined what they would have felt after encountering the situation,” referring to the uprising in Gwangju.

Song, who plays the cab driver, said he hopes audiences will feel the spirit of the people who died during the protests.

“I wouldn’t be able to fully understand the pain and tragedy they felt,” he said. “But I acted, wishing to earnestly deliver what happened. … I believe we have maintained peaceful lives thanks to their efforts and sacrifice. I dare say this is a movie delivering those people’s hope.”