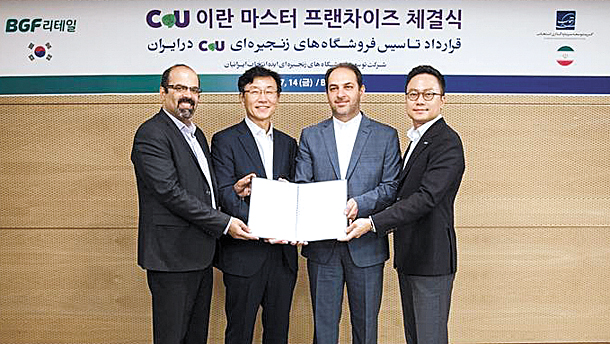 A master franchise contract is a deal in which a brand operator provides a franchisee company know-how, management systems and control rights to run the brand in a specified territory in return for loyalty fees. In this instance it means that Entekhab will take charge of opening and operating CU branches in Iran.

Through the deal, BGF Retail received an initial fee of 3 million euros ($3.4 million). It will receive more loyalty fees in the future as more branches are established in Iran, although the company did not share details on exactly what they would be.

“Master franchising is a method to stably receive loyalty while minimizing risk in foreign markets,” said BGF Retail in a statement.

Local partner Entekhab Investment Development Group is one of the largest retail companies. The group has over two decades experience working with Korean companies.

“Thanks to Hallyu, an affinity towards Korean brands is high in Iran,” said an Entekhab spokesman. “Because convenience stores don’t exist here, we’re expecting branches to expand rapidly to 300 by 2020 and 1,000 by 2022.”

Populated with more than 80 million people, Iran is one of the Middle East’s biggest markets. After the United Nations lifted economic sanctions against the country in 2016, Iran has risen as one of the few remaining blue ocean markets for global companies.

“An interesting point we found while looking into the Iranian market was that 60 percent of the population is aged under 40,” said a BGF Retail spokesman. Young people account for 50 to 60 percent of convenience store revenue.

“The contract is a notable event for the company in that it implies CU’s competence as a leading convenience store was acknowledged in the global market,” said BGF Retail CEO Park Jae-koo.