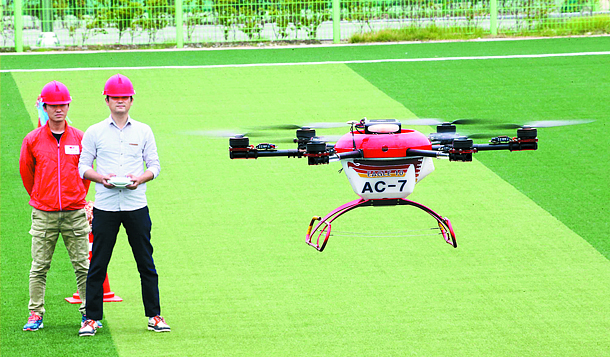 YEONGAM COUNTY, South Jeolla - Jobless at age 33, Yoon, who wished to be identified only by his surname, was looking for a new license to add to his curriculum vitae when he came across the news that drones were the latest trend.

A professional pilot license could land him a job, he thought, so he drove nearly four hours south to Yeongam County, South Jeolla, last month and signed up at a local training center where he stayed for nearly two weeks. Originally from Namyangju, Gyeonggi, Yoon took 60 hours of lessons on how to pilot a drone, briefly went back to his home and returned to Yeongam on July 5 for the final performance test.

Yoon was among seven students who showed up that day, four of whom hailed from a different province. Several were from Seoul or Gyeonggi. The mission to earn a drone license as soon and as cheaply as possible had pushed them to travel across the country since drone schools outside the capital offer exactly that.

Kim Ko-seul, 31, a fashion designer from Seongnam, Gyeonggi, said she agreed with Yoon that a drone license could come in handy one day.

“The gloomy prospects of the fashion industry are what brought me here,” Kim said. “I might end up working someplace else, maybe somewhere that requires the ability to pilot a drone.”

In the first five months this year, 875 people in Korea signed up for a drone performance test, up from 738 people last year and 311 in 2015, according to data from the Ministry of Land, Infrastructure and Transport, which administers the exam.

Only 55 percent of the applicants pass the final round, but the popularity of drone flying is rising at such a rapid pace that the ministry recently decided to add two extra test days per month to the current four.

Six more drone training centers certified by the ministry will open by the end of this year, bringing the total number of such establishments to 20.

“Drones can be used in many different ways,” said Kim Min-cheol, 38, a professional drone trainer, “from spraying pesticides on a field to taking aerial photos in a crime investigation scene, which is why so many people see it as a useful skill, something employers might like.”