The bitcoin bubble may be about to burst

The bitcoin bubble may be about to burst 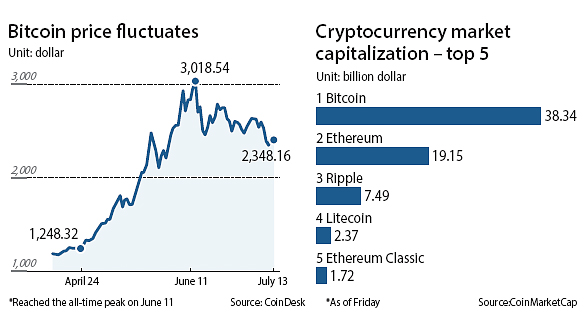 The prices of cryptocurrencies have been in steep decline across the board since the end of June, raising concerns among market watchers that the industry may be expecting a crash akin to the end of the dotcom bubble in the early 2000s.

The rising popularity of digital currency led the price of bitcoin to reach an all-time high of $3,018.54 on June 11, according to CoinDesk, a cryptocurrency information provider. Its price at one point on Friday, however, stood at $2,328, a nearly 25 percent fall compared to the peak price. Ethereum, which is the second largest digital currency by market capitalization, experienced a more drastic fall in its price, from nearly $400 in mid-June to as low as $200 on Friday.

On Friday, none of the top 40 currencies by market capitalization showed positive movement according to CoinMarketCap, a cryptocurrency data provider.

Market analysts diverge in their views about the decline.

Following the continuous fall of digital currency platforms’ prices, Richard Turnill, a chief strategist at investment management corporation BlackRock, warned of the possibility of a market crash. According to Fortune, Turnill compared the current movement of the currencies “to the characteristics of previous market bubbles, such as the dot-com boom of the late 1990s.”

Goldman Sachs, on the other hand, said bitcoin is just taking a breather before surging up to a higher level than before, possibly as high as to $4,000.

A major culprit behind the fall is an internal feud that could possibly lead bitcoin - the top market cap at nearly $40 billion - to split in half.

Bitcoin’s price more than doubled compared to the beginning of the year. Bitcoin is a cryptocurrency based on blockchain technology, which means data from transactions is split and stored among participants, making it nearly unhackable.

The bitcoin system can currently process seven transactions per second. Visa’s network can process some 56,000 transactions per second. To overcome the limitation, it is inevitable that a system to increase the block size limit will have to be developed. SegWit, which would increase the size of the block from one megabyte to two megabytes through a process akin to a software update, is the solution to the problem.

Some bitcoin miners, however, especially those running large-scale server farms, oppose the idea, as SegWit entails moving some of the data outside the main network to ease the traffic, which would undermine major miners’ profitability. Bitcoin is expected to undergo the protocol change on August 1, at which point the currency may split if the disagreement among miners isn’t resolved.

Mining refers to the process of solving computational problems to obtain bitcoin without needed to purchase them. Mining is also crucial to the survival of bitcoin as the computation problems that miners solve ensure transactions are securely added to the blockchain.

While no one knows what will happen after Aug. 1, some are calling it the “Y2K moment” or “the end of” bitcoin, leading to investor uncertainty. Concerned bitcoin investors began pulling out in the past month, sending shockwaves through the market.

The blame could also go to so-called Initial Coin Offerings (ICO). Akin to an initial public offering, an ICO is a means for start-ups or companies to raise capital. The difference is that companies involved in an ICO are cryptocurrency start-ups selling coins to supporters who expect the value of the coins to surge for profit in the future.

According to Smith and Crown, a cryptofinancial market research firm, the total fund accumulated through ICOs this year stands at about $760 million, seven times more than the amount raised last year, which was about $125 million.

Ethereum is the main currency through which ICOs take place. Investors hoping to partake in an ICO must purchase ethereum from the market and present it as capital to the start-up. This means more ICOs automatically leads to the rise in demand for ethereum - the second largest cryptocoin by market cap.

The price of ethereum catapulted by more than 20 times as a result this year. Once an ICO is completed, start-ups must cash out the received ethereum to spend, leading to an influx in the supply of ethereum on the market. “Put it simply, more ICOs means more buyers of ethereum, thus the increase in its price,” said Cha Myung-hoon, head of Coinone, one of the three largest digital currency traders in Korea. “But later, there are more sales after major ICOs which means a decline in the price.”

The price of trading coins in Korea also took a hit.

The price of cryptocurrency is normally about 10 percent higher in Korea compared to its global price due to a lack of major mining firms here, meaning the supply cannot match the demand. At the end of May, the price of bitcoin peaked at 4.84 million won ($4,200). The global price on the same day was about $2,500.

The price of bitcoin, however, took a nosedive in Korea after Bithumb, Korea’s biggest digital currency trader, was hacked at the end of last month. On Friday, bitcoin was trading at around 2.77 million won, only about $100 higher than the global price.