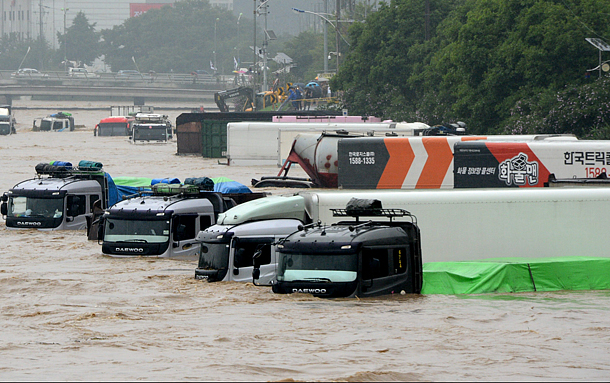 More than 50 buses, cargo trucks and excavators parked near Bogang Stream, Jeungpyeong County, North Chungcheong, are partially submerged or lost in the water as the stream flooded Sunday during the downpour. [YONHAP]

At least two people went missing, trains stopped running and more than 500 houses, markets and factories were flooded in North Chungcheong on Sunday.

The rainfall in Cheongju was the most the city has had in one day since Aug. 25, 1995, when it rained 293 millimeters. In the city on Sunday, it rained 91.8 millimeters per hour, the most on record for July.

The Cheongju city government issued landslide warnings in parts of the city. An 80-year-old female resident of Cheongju went missing in a landslide near her house around 9 a.m. Sunday.

A 78-year-old male resident of Boeun County, southeast of Cheongju, went missing in the morning after he went out to check on his rice paddy. Authorities had not located the two as of press time Sunday.

All trains on the Chungbuk Line, which runs from Daejeon Station and Jecheon Station, stopped running from 10:30 a.m. to 3:15 p.m. after tracks were flooded. The Korea Railroad Corporation restored the tracks before recommencing train operations.

The water level of Musim Stream rose to 4.1 meters around 11 a.m. Sunday, flooding 6.5 kilometers (4 miles) of a road adjacent to it. Authorities blocked 13 entrances to the road.

More than 500 cases of floods were reported to the North Chungcheong Fire Department on Sunday morning. Authorities estimated about 1,000 people suffered property damage from floods in Cheongju.

In Cheongju, a parking lot of a building near Seoknam Stream and another of an apartment near Bokdae Stream flooded, though not many cars were damaged as they were evacuated from the buildings. When Gagyeong Stream flooded, however, some 50 cars and 20 buildings were flooded.

More than 50 buses, cargo trucks and excavators parked near Bogang Stream, Jeungpyeong, were partially submerged or lost in the flood.

Three factories in Jincheon, including a 660 square-meter tire factory, were also flooded.

Authorities banned traffic from entering flooded streets in Cheongju, including the Yongam underground roadway, Seocheongju Bridge intersection and an intersection near a Lotte Hi-Mart branch in Bunpyeong-dong.

“The local government is monitoring the weather condition and sites that could be at risk by the downpour,” said an official of the provincial government. “We will do all we can to minimize damages from the rain and floods.”