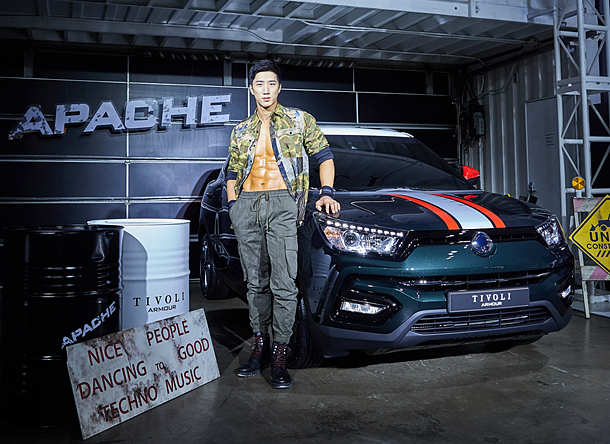 The Tivoli Armour is a facelift of SsangYong Motor’s best-selling small SUV. The car was unveiled on Monday at the SJ Kunsthalle in Gangnam District, southern Seoul. [SSANGYONG MOTOR]

Determined to maintain its lead in Korea’s small SUV market, SsangYong Motor on Monday launched a facelift of its best-selling Tivoli.

The Tivoli Armour, the fifth update to the model since its launch in 2015, will come with a lower price tag and more options for exterior customization, which the company hopes will continue to make the vehicle competitive as more rivals crowd into the small SUV segment.

“The Tivoli Armour offers a more stylish and dynamic vehicle for consumers in their 20s and 30s, and those who are older with a more youthful preference for cars,” said Lee Seok-woo, a marketing manager for the brand.

The Tivoli Armour comes with a new edition called Gear wherein consumers can customize the exterior and interior of the car. There are eight color options, three newly added, for the main body, and five design patterns for the hood and roof.

“The Gear edition allows for tens of thousands of different combinations for the Tivoli,” Lee said. “Enabling such options will make the production process trickier, but with the new Tivoli Armor, SsangYong is determined to make Tivoli a firm No. 1 model in the burgeoning small SUV market in Korea.”

The automaker has redesigned the Tivoli Armour’s front face to look stronger and firmer. The model comes with a front bumper inspired by the protection gear worn by football players and mechanics, the company said.

SsangYong Motor is considered a pioneer in Korea’s small SUV market. The market was nearly nonexistent before the Tivoli first came out in 2015. Afterward, the market nearly tripled, from 28,559 vehicles sold in 2014 to 82,308 in 2015.

Acknowledging the competitors, SsangYong lowered the price of the Tivoli’s main VX gasoline trim by 230,000 won ($200) to 19.99 million won.

Renault Samsung is also poised to launch a facelift of its QM3 SUV later this year.