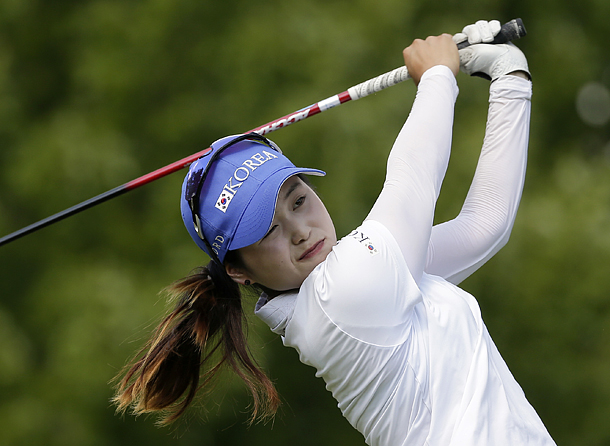 Choi Hye-jin, who won the low amateur, watches her shot during the final round of the 72nd U.S. Women’s Open at Trump National Golf Club in Bedminster, New Jersey, on Sunday. With a double bogey on the par three 16th hole, Choi came up two shots short of Park Sung-hyun to become the second player in the U.S. Women’s history, since Catherine Lacoste of Germany in 1967, to become an amateur victor. As Choi will be turning 18 on Aug. 23, the Bogner MBN Ladies Open starting Aug. 18 will be her last tournament as an amateur. [AP/YONHAP]

Aside from Park Sung-hyun, the super rookie who recently won the biggest event in women’s golf, the 2017 U.S. Women’s Open, the sport has another rising star, Choi Hye-jin, the amateur who finished second.

“As soon as I hit the ball, I thought it was going into the water,” Choi said at Incheon International Airport on Tuesday according to Yonhap News Agency. “I knew I was tied at the top, but then I hit such a bad shot.”

Choi teed off in the final group on the last day along with Shanshan Feng of China, taking the lead at one point with birdies on the second and seventh holes.

Though Choi missed her chance of becoming the first amateur victor in 50 years by making a double bogey on par three 16th, she showed her mental strength by not letting a double bogey affect her remaining shots and ending with a birdie to finish nine under par. Throughout the U.S. Women’s Open history, only Catherine Lacoste of France has won as an amateur in 1967. 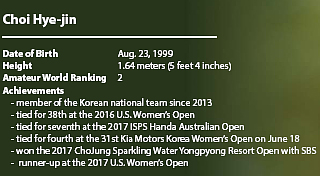 Statistically speaking, Choi played at the level of a top professional golfer. Throughout the weekend, her greens hit percentage was 75 percent, her average number of putts was 1.58 and her average driving distance was 245.96 yards.

This was Choi’s second U.S. Women’s Open, and compared to her performance last year, when she finished tied for 38th, her improvement was phenomenal.

“My primary goal was to make the cut and do better than last year,” Choi was quoted as saying by Yonhap. “I thought I could finish in the top 10 if things went right. And I wanted to become the first amateur champion in 50 years. It was an honor to play at such a prestigious event.”

Besides Choi’s accomplishment last weekend, in Korea, Choi has already made a name for herself as an ace player on the Korean national team. Choi is in her senior year at Haksan Girls High School and was selected to the Korean national team during the ninth grade, when she won a silver medal at the 2014 Incheon Asian Games. Then in 2015, Choi continued her success by winning both the team and individual honor at the World Junior Girls Championship in Ottawa, Canada.

This year, Choi finished tied for seventh at the LPGA tour’s ISPS Handa Australian Open, runner-up at KLPGA tour’s E1 Charity Open and right before she left to the United States, she became the first player since Kim Hyo-joo five years ago to win a KLPGA tournament at the ChoJung Sparkling Water Yongpyong Resort Open.

Choi is now ranked second in the World Amateur Golf Ranking and the runner-up finish at the U.S. Open has put her 24th on the Rolex World Ranking.

Despite her outstanding performance in professional tournaments, Choi was unable to accept any prize money, due to her amateur status.

That said, the Bogner MBN Ladies Open starting from August 18, will be Choi’s last tournament playing as an amateur, as she will be turning 18 on Aug. 23.

“I’d like to become a member of the Hall of Fame,” Choi was quoted as saying by Yonhap, “just like Pak Se-ri and Park In-bee.”