The North ‘as it is’

The North ‘as it is’ 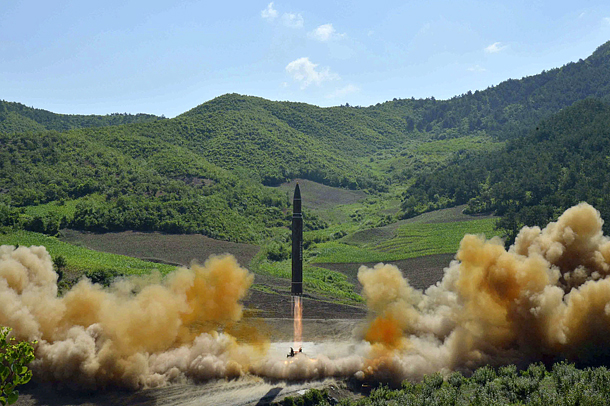 North Korea released a photo of the launch of a Hwasong-14 intercontinental ballistic missile on the Fourth of July. [AP/YONHAP]

North Korean leader Kim Jong-un stands in the circus ring with a whip in one hand and a nuclear weapon in the other. Two geopolitical giants — the United States and China – are helplessly crouched at the mercy of their cruel trainer in an editorial cartoon in the July 10th edition of the New York Times International Edition.

The caricature could not have better captured the wretched position of two superpowers with their hands tied as the unruly young North Korean leader celebrates a “completely successful” testing of an alleged intercontinental ballistic missile that can reach the United States. The two powers have been shamefully humbled by Pyongyang’s well-calculated provocation.

Before he was sworn in, U.S. President Donald Trump laughed at North Korea’s claim that it was in the final stages of developing a nuclear weapon capable of reaching the U.S. mainland. “It won’t happen!” he shrugged.

It sounded as if the U.S. president had devised some plan to avert it. But Pyongyang made him the fool by launching an ICBM that is believed to be capable of hitting Alaska — if fired at a normal trajectory — on the eve of the Fourth of July. That made Trump humbly grumble, “Does this guy have anything better to do with his life?” Under growing pressure from Washington to tame Pyongyang, Beijing became equally disturbed. It tried to underrate the launch of Hwasong-14 as an intermediate-range ballistic missile — not a longer-range ICBM as claimed by Pyongyang.

Nuclear weapons have become a survival means for Kim and his regime. To his father Kim Jong-il, nuclear weapons were leverage that could have been traded for the security of North Korea on sure terms. But his son has different ambitions. He is intent on advancing nuclear arms and perfecting his ICBM technology. He won’t stop until he has a deterrence no other state could doubt to ensure permanent security for his reign and that of the Kim dynasty in the future. It could be his best possible gambit.

It has become pretty certain that no economic sanctions, pressure or threat of physical force can change Kim Jong-un’s mind. Without determination to go into a full-fledged war, a military option is out of the question. Unless Beijing wants the Pyongyang regime to crumble, there would be a limit to its taming of its ally. In short, there is little Washington and Beijing can do.

There are growing calls for the international community to stop doubting North Korea’s nuclear weapons capability and get real. “The window for negotiating denuclearization is closed,” said Jeffrey Lewis, a North Korean expert at the Middlebury Institute of International Studies. He urged global leaders to “accept North Korea with a nuclear-armed ICBM” and to come up with realistic countermeasures.

Former U.S. Defense Secretary William Perry has similar advice: “We must deal with North Korea as it is, not as we wish it to be.” He said that Washington’s negotiations should be “oriented around what their goals are, and the strategies oriented around minimizing dangers” such as talking Pyongyang into yielding its nuclear weapons are beyond the capacity of the U.S. now.

James Clapper, who was former U.S. President Barack Obama’s director of national intelligence, claimed that it was a “lost cause” to try to get North Korea to scrap its nuclear arsenal. Trying to denuclearize North Korea currently is an “unrealistic goal,” he said.
In other words, the best the international community can do for the time being is to find some way to contain North Korea’s nuclear and missile capabilities from further advances instead of seeking denuclearization.

Although effective as deterrence, nuclear weapons cannot actually be used, which is the paradox of the nuclear doctrine. Once used, they lose all their power. As long as the U.S. nuclear umbrella stays in balance with the North’s nuclear deterrence, the nukes won’t be used against us. The alliance with the United States, then, is our lifeline.

While balancing the deterrence, South Korea needs to continue with humanitarian aid to help the average North Koreans. We must try to trigger changes from within. Through our patient efforts, changes may come at a higher level.

Despite their expansive nuclear capabilities, the United States and Soviet Union survived the Cold War and co-exist without a nuclear threat. We could fall into North Korea’s trap if we recede at every threat and pour our resources into reinforcing our capabilities against North Korea’s potential threats.

We must ensure that the alliance with the United States stays intact and we must move on. To reach the unattainable destination of denuclearization, we must forget about the peak for a while. Every step, stretch and climb will one day get us there.