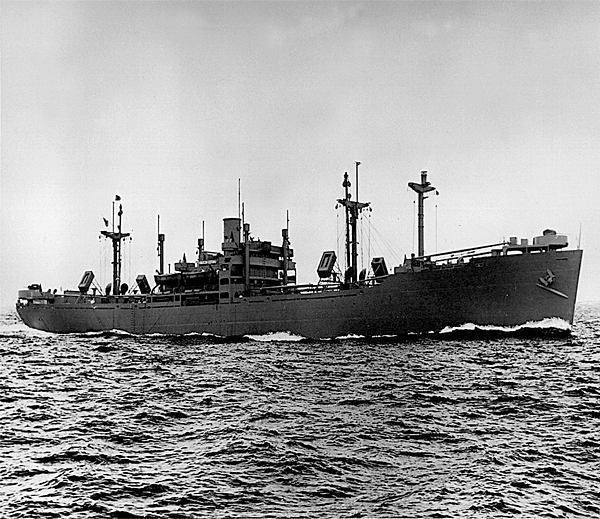 SS Meredith Victory was a cargo freighter that carried 14,000 refugees, including the parents of President Moon Jae-in, from Heungnam harbor in North Korea to Geoje Island in South Korea during the 1950-53 Korean War.

One of the key reasons that the United States won World War II was material superiority. Sherman tanks, the main armored vehicle of the U.S. Forces, was not on par with German Panther or Tiger tanks, but by deploying five to ten tanks for every enemy tank, the United States defeated the Germans.

To wage a material war, the military supply and logistics need to be solid. The Atlantic Ocean was swarming with German U-Boats targeting Allied supply ships. The United States addressed the risk with sheer volume. It made more ships than Germany could attack.

The mass-produced ships used a standardized design known as the Liberty Ship, a model that holds 10,800 tons of cargo and sails at 11 knots, and in four years, staring in September 1941, a total of 2,710 units were made. The United States constructed two ships a day.

The Victory is an improved version of the Liberty and can take more cargo and sail faster. From January 1944 to the end of the war, 534 ships were constructed and operated as the main supply ship for the U.S. Forces from World War II into the Vietnam War. The first 35 are named after countries in the Allied Forces. The next 218 are named after American cities. The remaining are named after higher education institutes in the United States.

The SS Meredith Victory and Lane Victory, cargo freighters that rescued refugees, including President Moon Jae-in’s parents, from Heungnam during the Korean War, are named after Meredith College in North Carolina and Lane College in Tennessee.

In all, 36 Victory ships participated in the Korean War. The SS Meredith Victory is sometimes called the “Ship of Miracles,” as it evacuated 14,000 refugees even though the ship is designed to carry 12 passengers and 47 crew members.

There are now only three Victory ships remaining. Many were sold to the private sector and used as cargo ships before being taken apart. The SS Meredith was sold to China for scrap metal in 1993. Fortunately, the Lane is preserved in a Los Angeles history museum.

Geoje-si in South Gyeongsang province hopes to acquire the ship for several years as part of a memorial project commemorating the Heungnam evacuation. A civilian organization is going to work to bring the SS Lane to Korea. It won’t be easy, as the SS Lane Victory is one of only about 2,500 U.S. National Historic Landmarks.

But it’s worth the work since this ship, revered by both Korea and the United States, is a deserving symbol of the power of humanitarianism.