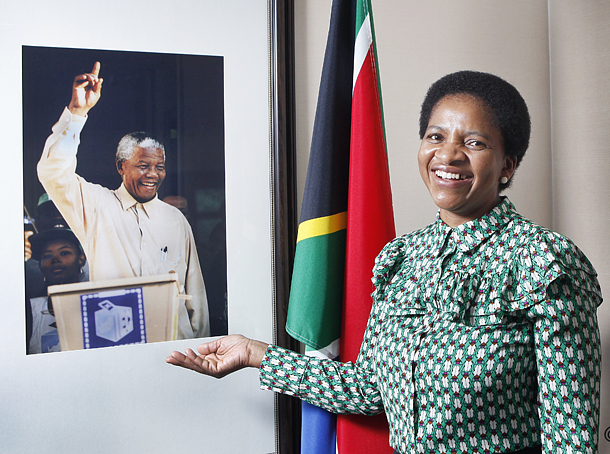 South African Ambassador to Korea Nozuko Gloria Bam points to a photo of Nelson Mandela at her office in central Seoul on Monday, a day before Nelson Mandela International Day on July 18, commemorating Mandela’s service to the world. [PARK SANG-MOON]

In celebrating Nelson Mandela International Day, which falls on July 18, South African Ambassador Nozuko Gloria Bam called upon Koreans to share in the day’s spirit of “making the world a better place wherever you are.”

Bam continued, “This is not only a South Africa day, it is also a day in Korea where people can individually celebrate it in honor of Mandela. And we are making strides in bringing the spirit to Korean society.”

The day was launched by the UN General Assembly in 2009 to celebrate and remember Mandela’s service to the world. Mandela was an activist and former president of South Africa who helped bring the apartheid system to an end in 1994, after he was released from 27 years of imprisonment. The South African Embassy in Seoul celebrated the legacy of the country’s former leader, whom many call by his Xhosa clan name, Madiba, by paying a visit to Samdong Boy’s Town in western Seoul on Tuesday.

“We are contributing to the day by visiting the center and helping out with the staff there,” Bam said. “But the day is not just about visiting institutions to help out, it is also about learning from them and making a meaningful contribution, even if it means putting a smile on another person’s face for a day. It is a day for each and every person to make a difference wherever he or she is, and I would like to see more Koreans stand up for it.”

The ambassador said she witnessed a similar spirit in Korean history.

“Looking at where Korea was 50 years ago and how Korea managed to develop itself through the spirit of cooperation amongst communities here, there is a lesson of a society of people who are willing to develop themselves to make a difference in each other’s lives,” she said. “If you talk to most African ambassadors here, they would wish they can take the concept [back home] to build the societies along the same ideals.”

Reflecting on the recent Korea Queer Culture Festival, where thousands gathered in central Seoul to support the lesbian, gay, bisexual, transgender and queer community, the ambassador said that it takes time for people to accept differences based on gender, ethnicity or religion.

“It goes back to our constitution ? we said we will stand for a country that will respect others, and if it is one of our values, we want to ensure that we don’t discriminate people based on gender, color or creed,” Bam said. “We have to accept the differences and that is why we accepted same-sex marriages.”

South Africa legalized marriage for same-sex couples in 2006, the first African nation to do so.

“Yes, there are some in our society who are still skeptical about it and their views are largely based on religious beliefs and culture,” she said. “But, with time, through education and more awareness programs, we hope to see increasing levels of tolerance and hope that our society will accept lesbians and gays as citizens who deserve to be treated with dignity.”