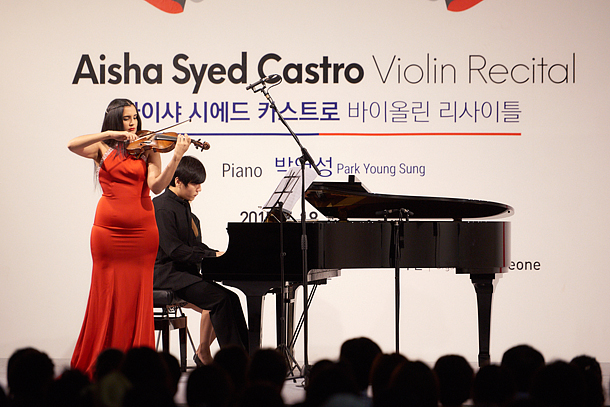 She may be young, but Aisha Syed Castro, a 27-year-old violinist from the Dominican Republic, filled the air with a powerful elegance that grabbed the audience’s hearts on July 18, when she gave a violin recital at the Korea Foundation (KF) Gallery in Jongno District, central Seoul. The recital was co-organized by the Korea Foundation and the embassy of the Dominican Republic.

As the fourth in a series of 2017 KF Gallery Open Stage events, Syed played five pieces from different countries along with pianist Park Young-sung, including a Dominican piece by Julio Alberto Hernandez named the “El Primer Beso,” Niccolo Paganini’s famous “La Campanella” and four parts from Cesar Franck’s “Violin Sonata in A major.” Syed played a solo piece by Johann Sebastian Bach, “Violin Partita No.2 in D minor” - a song she cited as the piece that made her fall in love with the violin.

Designated the Honorary Goodwill Ambassador for the Dominican Republic in Oct. 2015, Syed travels around the world to spread peace through her violin. To Syed, her music is a “universal language” through which she can communicate with God, and with those from the opposite ends of the world.

“To me, the violin is my voice for society,” said Syed in an interview with the Korea JoongAng Daily prior to the recital. “I think it’s something that has been given to me in order to make, even if it’s a small change, in the world. And to contribute through music and many other things like going to play at a hospice or an orphanage, which I do very often, is for me, such a gift.”

“I began [playing the violin] when I was five years old, and then my career got really professional when I was able to debut with my country’s national symphony orchestra at age 11,” recollected Syed. As a child prodigy, at 11 years old, Syed was the youngest pupil to ever be accepted into the Yehudi Menuhin School in the United Kingdom. Ever since, Syed has been performing all over the world, including at the Luxembourg Palace in Paris and Wigmore Hall in London.

“I wish I could say I have something Dominican in a way. Our folk music is very different. We have merengue, bachata, but within those rhythms, you find a certain quality of rhythm which can be common through classical music as well. So I try to bring some of that, and I hope the audience can see it,” said Syed.

“It’s so important to enjoy what you’re doing, and to make sure what you have chosen to do in your life, whether it’s the violin, the cello, or anything else, you do it with passion and you make sure that is your passion. Because that’s going to guarantee that you will do well in what you choose.”