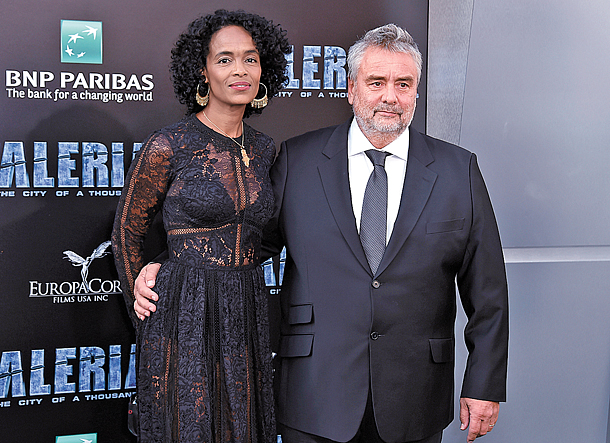 Producer Virginie Besson Silla and director Luc Besson arrive at the L.A. Premiere of “Valerian and the City of a Thousand Planets” in Los Angeles on Monday.[AP/YONHAP]

BEVERLY HILLS, California - “I’m Valerian and she’s Laureline,” Luc Besson says with a smile, gesturing to his producer and wife Virginie Besson-Silla. “She’s the clever one.”

Valerian and Laureline are the lead characters of Besson’s sci-fi epic, “Valerian and the City of a Thousand Planets” which hits theaters Friday. They’re names that most American audiences don’t know, even though the French comic about two 28th century intergalactic cops that it’s based on, “Valerian and Laureline,” has been in existence for 60 years and influenced “Star Wars.”

The filmmakers sit in their shared office in the Beverly Hills outpost of Besson’s company EuropaCorp, about a month before “Valerian” debuts stateside. He’s behind a massive, rectangular wooden desk and she’s across from him.

Besson-Silla has a desk too. It’s off to the side, round, and much smaller.

“I prefer a round table! Everyone thinks it wasn’t my choice,” Besson-Silla says.

“She could have had a bigger one,” he adds, seemingly still befuddled by it.

It’s almost another metaphor for their relationship - Besson as the larger-than-life public-facing personality who makes big statements and even bigger movies, and Besson-Silla as the one who orchestrates things in her own way just slightly out of the spotlight. She looks at her husband, bemused, and chimes in occasionally - often when he turns to her looking for the right English word.

They were colleagues before they were anything else. Now they have three children, ages 15, 14 and 11, and have found they actually enjoy being partners at the office and home.

“We were not stupid. There is a risk. We took our time and then very consciously we said, ‘Let’s try on one to see if it works,’” Besson says. “Actually it works 10 times better than I expected.”

“Valerian” is by far the biggest film they’ve ever done - estimated to have a $180 million price tag. Both are coming off the success of “Lucy” and the decades of goodwill Besson has built up in wild-eyed, crowd pleasing genre fare like “La Femme Nikita,” “The Professional” and “The Fifth Element.”

He says “Valerian” is the movie of his life.

Though he was a lifetime fan of the series, it wasn’t until he was working on “The Fifth Element” with “Valerian” illustrator Jean-Claude Mezieres that he even considered taking it on.

“He’s the one who said, ‘Why don’t you do Valerian?’ I never thought of it before,” Besson says.

Besson wouldn’t acquire the rights for another 10 years. It wasn’t until he visited James Cameron on the set of “Avatar” that he realized a film adaptation of “Valerian and Laureline” was even possible.

And they’ve taken their time with it. Besson did a large number of character and world sketches himself. He created a bible with five-page descriptions of all the creatures. Both secured a historic collaboration between the two visual effects giants WETA and ILM to do the 2,700 VFX shots (“The Fifth Element” had around 200). And he found his perfect leads in two burgeoning stars: Cara Delevingne for Laureline and Dane DeHaan for Valerian.

“I definitely don’t want Schwarzenegger to play the part. I want someone human,” Besson says of DeHaan.

They shot the film in France on soundstages that Besson helped design.

“We’re very proud to be able to bring such a big production to the country and to bring work to hundreds of people. There’s a real pride in that,” says Besson-Silla. “And we have amazing facilities.” AP