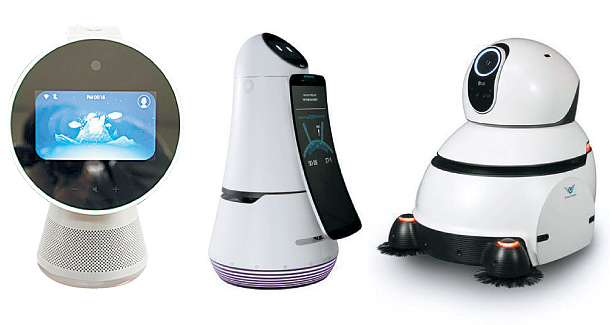 From left, a so-called Social Bot that recognizes both the voice and image of a user developed by SK Telecom; a guide robot developed by LG Electronics to aid travelers at Incheon International Airport; and a cleaning robot, also from LG, deployed at the same airport for more efficient cleaning. [SK TELECOM, LG ELECTRONICS]

LG Electronics announced Friday that it aims to bolster its robot business to make it the company’s future growth engine in an era of rapid digitization.

The first project is to begin the pilot service of its robots at Incheon International Airport, where over 57 million travelers come and go every year. According to the electronics maker, it deployed 10 robots at the airport, five for airport guidance and five for cleaning.

The guide robots are equipped with LG’s own voice-recognition platform and are capable of speaking in four languages: Korean, English, Chinese and Japanese. The robot is connected with the airport’s main server so it can effectively notify travelers of real-time information on flight schedules, delays and terminal numbers as well as locations of convenience facilities.

At users’ requests, the robot can escort people to the desired destinations as well, according to LG. Of the five, two will be place in the duty free zone, past immigration.

The cleaning robots are basically an upgraded version of the robot vacuum cleaners used in many homes. Autonomous driving and obstacle avoidance features have been adapted to the airport environment. According to LG, these cleaning robots determine the most efficient route to move around the vast space of the airport.

The robots have been tested for five months so they can adapt to various noise, obstacles and emergency situations at the airport.

“Starting with our pilot service at the Incheon International Airport, we will gradually expand our business area with robots,” said Song Dae-hyun, president of LG’s home appliances and air solutions division. “We hope to take leadership in the era of the fourth industrial revolution by continuous research and development.”

LG is currently developing robots for homes, such as robot vacuum cleaners and hub devices that can control smart home appliances via the Internet of Things.

Hub devices refers to LG Smart Hub Robot, introduced through the Consumer Electronics Show in January, which connects home appliances, similar to voice-powered assistants but with a robotic appearance. For enterprises, LG will expand its customer targets from the airport to banks and public institutions.

LG is not alone in eying the robotics market as its next cash cow. The nation’s largest mobile carrier, SK Telecom, unveiled various versions of artificial intelligence-powered robots through Mobile World Congress in Barcelona in February.

While its speaker-type AI assistant Nugu is already on the market, the company had said its AI devices will evolve to be more like humanoid robot type products, similar to “Pepper” from Japan’s SoftBank.

Pepper is capable of working at reception desks at hotels and assisting product sales.

The so-called Social Bot from SK Telecom has a round mirror-like monitor with a camera attached. The robot, though it stays still on tables, can interact better with users as it can display information or facial expressions through the monitor. The carrier had also introduced “Toy Bot” which looks like a plain doll but is capable of calling parents on spoken orders from kids.

The products, however, are still in the development and testing process and according to a company spokesperson plans for official market release has not been detailed.

Korea’s portal service giant Naver has also been investing on robotics research by setting up a separate corporation dedicated to future technology development, called the Naver Labs earlier in the year.

Last year, the company showed off its first robot, dubbed M1, a fully automated indoor mapping robot capable of conducting scalable 3-D image processing. According to Naver, the robot uses laser scanners and high-definition cameras to capture space information and maps in out into 3-D video.

“It can be thrown into any indoor space in which GPS doesn’t work and still create a 3-D map,” Song Chang-hyun, the chief executive of Naver Labs, said during his introduction of the robot at Seoul Motor Show held in March. “It can be used as a key platform for many space-based services such as real estate.”

But LG’s key rival, Samsung, has not been active in showing plans for the robotics business. While there were media reports saying Samsung is hopping on the bandwagon to bolster its robotics business and unveil its own AI speakers, a spokesperson from the giant electronics maker said it is not true.

“There are many ongoing research and development projects in Samsung and majority of them don’t make it to the market,” the spokesperson said. “There could have been attempts of development but there are no plans for the company to release AI speakers or robots similar to LG at the moment.”

According to a report released by the International Data Corporation last year, worldwide spending on robotics and related services will hit $135.4 billion in 2019, nearly double the $71 billion spent in 2015.