Lotte service lets you shop without a cart

Lotte service lets you shop without a cart 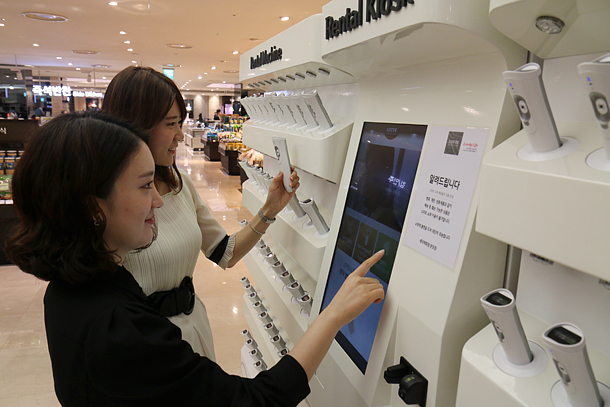 A shopper at Lotte Department Store’s Nowon location uses a new Smart Shopper service that lets customers shop without having to carry around a basket or cart. [LOTTE GROUP]

Lotte Department Store on Sunday equipped its Nowon location in northern Seoul with a “Smart Shopper” service that allows customers to browse items without carrying around a cart.

It is the second department store to receive the service after Lotte installed it at its Bundang location last October.

Instead of lugging around a basket or cart, customers can carry around a special shopping device with a scanner and scan the barcode of items they would like to buy.

They can then check out the scanned items at an unmanned counter and pay for them using either a credit card or Lotte’s online payment system L.Pay. The department store can then deliver the items to the customer’s home.

For the Nowon location, delivery is available for Nowon District and Dobong District in northern Seoul. The Bundang location can only deliver within Bundang District in Gyeonggi.

Lotte Department Store said the Nowon location will also have a Smart Locker service where customers can store their belongings while they shop. Unlike conventional lockers in subway stations or supermarkets, Lotte’s Smart Lockers have a temperature control system in case customers want to store groceries or fresh food they just bought.

The retail giant will also offer a service that connects the Smart Shopper system with the Smart Lockers. Those who want to browse other parts of the department store after doing their grocery shopping in the produce section can ask for their food items to be stored in the locker and then pick them up when they leave.

Lotte Group has been trying to adopt elements of the so-called fourth industrial revolution, including elements of online shopping and payment, to its retail outlets under the helm of its chairman, Shin Dong-bin. The group has formed a task force dedicated to the initiative.

Lotte was the first retailer in Korea to introduce a robot shopping assistant at its department store in Myeong-dong, central Seoul, and the first to offer a virtual 3-D fitting service and automatic foot measuring device for handmade shoes.

The shopping assistant robot called Elbot is still at its beginning stages, though, and only able to respond to preregistered orders.

“In the face of the fourth industrial revolution, it has become crucial for retailers to utilize diverse information and communications technology,” a company spokesman said.

Lotte said the number of new visitors at its Bundang branch increased by 10 percent after it implemented smart shopping services last year. An average of 50 people use the Smart Shopper service daily, the company said, with 70 percent of them going on to use the service again.