Summer in Seoul comes with a sting

Summer in Seoul comes with a sting 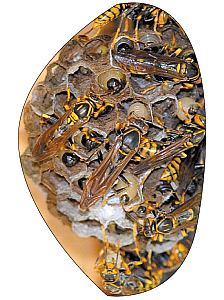 Jeong Hyo-jae, 23, a firefighter in Seoul, takes pride in a new skill he recently learned on the job. More than 10 times a day, he destroys bee hives in Eunpyeong District, northern Seoul.

“It’s already my second time today,” Jeong said earlier this month as he arrived at an apartment complex at 10 in the morning. He walked up to an apartment on the fourth floor and went to the veranda. A hive of about 20 centimeters (8 inches) in diameter hung outside the window.

Jeong sprayed pesticide, and within 10 minutes, managed to pry it off the ceiling without getting stung.

Seoul’s firefighters are battling the bees like never before this summer. There were 9,195 bee hive calls in 2015, according to the latest available data from the Seoul Metropolitan Fire & Disaster Headquarters, up 133 percent from 3,937 cases tallied in 2011. From 2011 to July 2016, a total of 36,648 bee calls were registered with all fire stations in the capital.

Bee experts point to Seoul’s green urban landscape as a cause. Eco-friendly areas that local governments have set up within the city and roof gardens by residents attract bees from the suburbs.

One species that’s rapidly spreading, according to Dr. Choi Moon-bo from Kyungpook National University’s plant biosciences department, is the Asian hornet, which is a relative newcomer to Korea. It arrived from Southeast Asia in 2003.

“Up to 2013, they lived in the country’s southeast areas,” said Choi, “but they reached Seoul and north Gyeonggi last year, which basically means that it’s safe to say they’ve expanded throughout the entire country.”

An Asian hornet’s sting is known to be 15 times more toxic than that of a paper wasp, the indigenous type of bee in Korea’s urban areas.

In case of a bee or wasp sting, an officer from the Seoul Metropolitan Fire & Disaster Headquarters advises removing the stinger by lightly brushing the area with the edge of a credit card, and then cleansing the sting site with clean water and disinfectant. Senior citizens are strongly recommended to call 119 in case of a hornet sting, which, in the most extreme case, can lead to a heart attack.