Moon tries for a new paradigm on the economy

Moon tries for a new paradigm on the economy 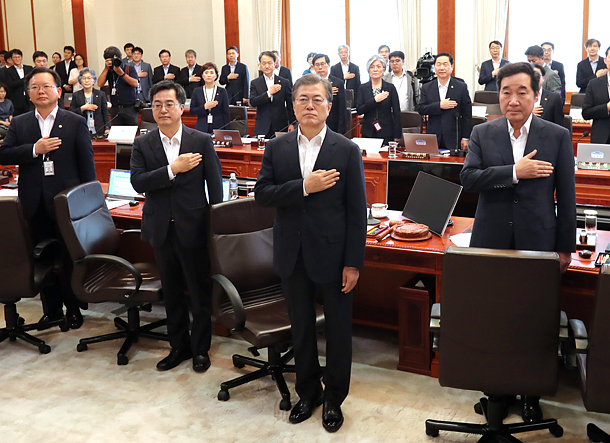 President Moon Jae-in, third from left, and his cabinet members salute the national flag at the Blue House Tuesday. It was the first time the president presided over a cabinet of ministers he chose and didn’t inherit from the previous administration. [YONHAP]

The government said it will rely on an expansion of the budget to boost sluggish growth and restore it to 3 percent.

The Ministry of Strategy and Finance said a new paradigm is needed and economic policies of the Moon Jae-in administration will focus on the livelihoods of the people.

“The domestic economy faces various complex structural problems such as slow economic growth and wealth polarization,” said Kim Dong-yeon, Minister of Strategy and Finance at a press briefing at the Central Government Complex in Seoul on Tuesday. “Other countries in the world are changing their policies to solve such issues through wealth distribution and diversifying their growth engines after the global financial meltdown.

“We might undergo trial and error from changing an economic paradigm that has been continued for decades,” he continued, “but we need to try the new policies even though we feel them quite unfamiliar. We will execute 70 percent of the supplementary budget for this year before Chuseok [the Korean harvest festival], and will have the economy grow at 3 percent from now on.”

“We decided to change the current economic paradigm to get out of problems we face such as wealth polarization and came up with economic plans that focus on expanding budgets and household incomes,” said Deputy Finance Minister Lee Chan-woo.

Many of the plans include various financial and social benefits to companies that create more jobs. The new policies will need private sector support.

The government plans to give tax benefits to small and mid-size companies that upgrade contract and part-time workers to full-time salaried positions. The ministry said it will give the same benefits to foreign companies operating in the country if they create more jobs.

According to the Finance Ministry, it will raise the unemployment allowance rate from the current 50 percent of the previous salary to 60 percent, and push the minimum wage up to 10,000 won ($8.96) per hour by 2020.

The government announced it will increase the supply of housing for young people and reduce taxes for people who ride public transport. It will also encourage electric vehicles with subsidies.

The Finance Minister Kim said Tuesday that the ministry will announce its tax plans for next year by next week. The ruling Democratic Party has been suggesting the ministry raise taxes on the wealthy and big companies.

But some worry that the private sector isn’t on the same page as the administration. Increased government spending worries some people too.

“The government said it needs about 178 trillion won to proceed with the policies and said that half of the funding will come from more efficient spending,” said Ahn Chang-nam, a professor of tax policies at Kangnam University. “I think it is better for the government to raise taxes more actively to come up with funds that it believes are needed.”

“The private sector is very important when it comes to jobs and household incomes,” said Pyo Hak-gil, an honorary economics professor at Seoul National University. “Companies are cutting down the number of employees due to low labor productivity that they face and creating more jobs in the current situation will worsen the productivity. I believe that any positive impact coming from the policies will only be temporary.”

But the Korea Chamber of Commerce and Industry, a business lobbying group, welcomed the government’s latest plans to boost the economy.

“We believe the government laid out plans that will solve slow economic growth and wealth polarization at the same time, and expect a budget that is spent aggressively on the second half of the year to have a big impact on boosting the economy and improving the lives of people,” said Lee Kyung-sang, a director at the KCCI. “We will also work on improving the country’s economy, creating more jobs and having large size companies cooperate with smaller firms.”