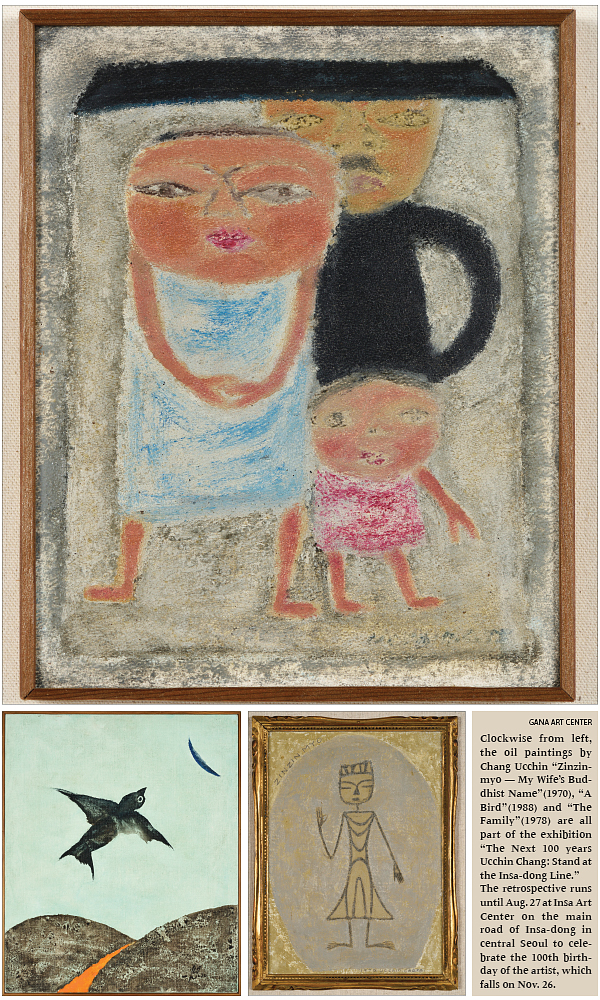 In many paintings by Chang Ucchin (1917-1990), one of the most-beloved Korean modern painters, appear a family that consists of a mother, a father and a child, in his signature style of primitive art that has both heartwarming and healing qualities.

About 100 pieces of Chang’s work, including such paintings, are on view at the Insa Art Center on the main road of Insa-dong, in central Seoul, to celebrate the artist’s 100th birthday, which falls on Nov. 26. The retrospective’s title is “The Next 100 Years Ucchin Chang: Stand at the Insa-dong Line.”

“When my brothers, sisters and I saw those paintings, each of us would think ‘It’s me. I’m the child,’” Chang Kyung-soo, 72, the artist’s eldest daughter and director of Kyungwoon Museum said, smiling, at a press preview of the retrospective on Monday.

She explained that they all felt love from their father, although Chang was neither a very attentive father nor a good breadwinner.

“My father always felt guilty for it and expressed it to us from time to time,” she said. “So we sympathized with him. I would side with him, when he was having a quarrel with my mother. One day, she shouted at me ‘How can you take your father’s side, even though it’s me that pays for your tuition?’ Actually, she earned a living and I would not have gone to school without my mother.”

Chang’s wife, Lee Soon-kyung, 97, was the supporter of the family and gave both material and emotional support to the artist despite many quarrels, according to their daughter Kyung-soo.

On display at the exhibition is a rare painting by Chang that depicts solely his wife. The 1970 painting has the title “Zinzinmyo - My Wife’s Buddhist Name.” In this painting, his wife Lee, a devout Buddhist, is portrayed to look like a Buddha or bodhisattva.

“My mother would complain to my father that he seldom painted her portrait,” Kyung-soo explained. “At that time, my father used a studio in Deokso of Namyangju [in northern Gyeonggi province]. But he didn’t work there in winter because it was so cold in the studio.”

“One winter day, he suddenly went to Deokso and painted the portrait of my mother that resembled a Buddha with all his heart and soul - even skipping meals. After he finished the painting and returned to our home in Seoul with it, he got so ill and was in bed for three months. My mother was frightened, thinking he might leave her forever with the painting behind. So, she didn’t like the painting and later sold it. My father was sorry for that, as he loved the painting.”