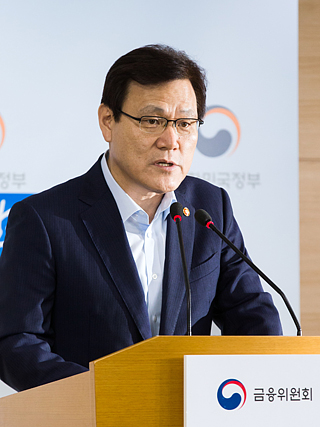 The head of the nation’s financial regulator heralded tighter controls on banks on Wednesday to push them to funnel more credit towards the corporate sector rather than consumer lending.

Choi Jong-ku, chairman of the Financial Services Commission, attacked the banks’ revenue structure, which is heavily dependent on margins of lending interest, in his first press briefing since taking up the role.

“In Korea, financing offers have been centered on household lending and mortgage loans instead of productive segments such as promising small and medium enterprises,” he said.

Choi went on to criticize some of the major banks since they have increased consumer lending at the expense of corporate loans.

“Woori Bank set aside 68.6 percent of their loans for companies in 1999 but the portion was reduced to 44.3 percent in 2016 while Shinhan Bank lowered the proportion from 74.2 percent to 47.9 percent during the same period,” he said.

KEB Hana Bank saw its corporate lending decreasing to 45 percent in 2016 from 72.8 percent in 1999, according to Choi quoting data from the Financial Supervisory Service.

The shift could translate into growing household debt and higher volatility in the financial market, he said. The chairman said that the Financial Services Commission will amend the rules to ensure smaller companies easier access to borrowing at major lenders.

The regulator will order the banks to factor in non-financial aspects of corporate clients - such as the state of technological development and number of patented rights.

The moves are aimed at achieving Choi’s vision of a production-oriented economy and financial inclusion for the underprivileged. To support people with moderate or lower income levels, he will spearhead a large-scale debt relief program starting next month. The major beneficiary will be people who signed up for the National Happiness Fund but struggled for a long time to pay relatively small amounts.

The National Happiness Fund is a state-run fund established by the former Park Geun-hye administration to help low-income people write off debts.

Indebted, low-income earners were allowed to sign up for a state-supported debt relief program.

The program will forgive debts overdue for 10 years in the fund if the amount is less than 10 million won ($8,930). The number of beneficiaries is estimated at 437,000 and an average of 4.35 million won will be forgiven.

“On top of the 400,000 people, we will see if we can expand the support so that people can step out of the debt burden and rebuild their lives,” Choi said.

The Financial Services Commission will also cut the maximum interest rates for lenders from the current 27.9 percent to 24 percent in a bid to ease the burden of indebted people.

“We will quickly implement the changed rate starting next year,” he said. “After assessing how it turns out, we would introduce further cuts,” Choi said.

In line with the Moon Jae-in administration’s focus on job creation, the Financial Services Commission will unveil a plan to convert contract workers in public financial corporations into regular ones in September.