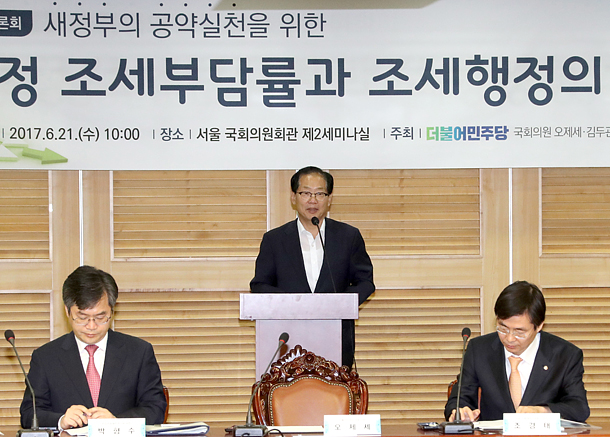 Oh Jae-sae, a lawmaker from the ruling Democratic Party, speaks at a debate on how to raise tax rates to meet President Moon Jae-in’s expansive plans for the economy. [AP/YONHAP]

Nobody likes taxes. Death isn’t popular either, but as the adage goes, nothing is certain but death and taxes. No governments want to talk about tax hikes as it could put its ruling power in jeopardy. Even dictatorships fear the so-called tax curse. A 10-percent value-added tax in 1977 accelerated the collapse of strongman Park Chung Hee. Under another general-turned-president, Chun Doo Hwan, interior minister Chung Suk-mo had to step down in 1986 due to a public outcry over a hike in property tax rates. His ministry slightly revised tax rates according to building size, but the move later was heavily criticized by the ruling party. A blanket tax that is levied on all types of possessions is more sensitive. President Roh Moo-hyun became hugely unpopular upon introducing the so-called comprehensive property tax.

President Moon Jae-in, who served as Roh’s chief of staff, would know the perils of a tax hike as well as anyone else. He was ambiguous throughout the campaign when he was asked about his position on taxes. He vowed to generate economic growth through increases in jobs, but was reluctant to answer how he would achieve that. He vowed to increase annual fiscal spending by 7 percent during his five-year term, compared with the average of 3 percent to 4 percent in recent years. His ideas to bolster social security and welfare would require a whopping 178 trillion won ($160 billion) budget. But Moon did not say how he would come up with the means to finance all those generous plans. “Increasing taxes was the only way, but we dared not say that and risk the election,” said an aide on Moon’s campaign staff.

Moon’s camp decided to draw up a plan after winning the election. Kim Dong-yeon, finance minister and deputy prime minister for the economy, said there won’t be any increase in the tax rates this year at least, which suggests the ruling power has yet to come up with a specific scheme.

Then talk of raising taxes on the rich and big companies came out of the blue over the weekend. Why now? First, the ruling party could have thought it would be best to make an unpopular move at a time when the president is immensely popular. Second, since the levy would only affect the richest individuals and companies, most of the population would not care. Third, the attempt may not be that bad for the politics of mustering the support of Moon’s base by pitting the majority working class against the minority rich. The ruling party has kicked off a novel manner of framing the issue after calling it an “honor tax” or “respect tax.” Moon reassured the people by underscoring that he won’t increase taxes on the working class during his five-year term.

The problem is that the math simply does not add up. A higher tax on the richest Koreans would add approximately 4 trillion won to the government’s annual tax revenue. That can hardly be enough for a five-year 178 trillion won spending plan. Another option of moderate tax hikes for a moderate spending plan could stoke public protests. No matter how it is glorified, tax is tax. No one wishes to pay extra tax to the state. Realistically, it would be more worthy to collect more taxes from the middle class.

Maybe, the government has that in mind as a bigger motive and plan. It may first propose raising taxes on the rich to gain ground to later persuade the middle class of the need for a blanket scheme of greater tax for greater benefits.

Only a president commanding an approval rating of over 70 percent could attempt such a bold move. Moon has taken left-leaning actions — raising the minimum wage, shutting down nuclear power plants, and putting underprivileged contract workers on the permanent payroll. Such policies may broaden distribution of wealth but, they will end up reducing efficiencies. Few can achieve equality and distribution by risking efficiencies. Only fair and broad tax increases could strengthen distribution without undermining the efficacy of government policy.

The administration will release its first proposal for a tax code revision next week. Let’s hope it is courageous enough to include a proposal for a blanket tax increase. The public realizes an astronomical bill is due five years down the line.