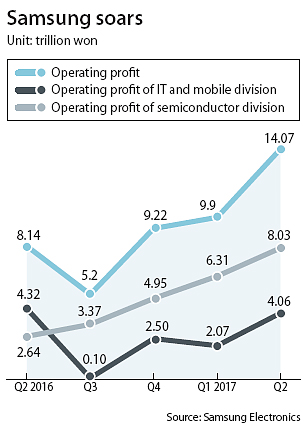 The IT and Mobile Communications (IM) division’s operating profit reached the 4 trillion won level for the first time in a year - an indication that the world’s top smartphone producer has overcome the aftermath of the humiliating recall and discontinuation of the fire-prone Note7 phablet last year.

The second-quarter operating profit in the division was almost double the preceding three months, which registered 2.07 trillion won.

Operating profit at the chip division was 8.03 trillion won in the second quarter - three times more than the same quarter last year at 2.64 trillion won - primarily thanks to a strong demand for high-density server DRAMs and solid disk drivers for servers.

The company expects favorable semiconductor conditions to continue in the second half, largely owing to the expansion of new server platforms, cloud services and new smartphones coming onto the market.

As of the second quarter, chips accounted for 57 percent of the entire operating profit at Samsung, compared to 28.9 percent for mobile phones.

Samsung said robust sales of the Galaxy S8 and its bigger sibling S8+ were behind the significant quarterly earnings growth in the IM business.

“Even though S8 was released later than expected, its sales exceeded the S7 in the majority of regions for the same span,” said Lee Kyeong-tae, vice president of mobile communications business, in a conference call Thursday morning. “The S8 series sold particularly well in emerging markets and some regions saw sales double.”

He added that the S8 series accounted for over half of all smartphone sales at Samsung, contributing to both revenue and operating profit.

In the April-June period, Samsung sold 93 million mobile phones and 6 million tablet PCs. Among all of the phones sold, over 80 percent were smartphones.

When asked about the Galaxy Note8, he emphasized the phablet’s unique characteristics.

“Some point out a series of recent large-screen phablets may complicate the demand for the Note8 but we intend to provide the Note series’ own experience through multimedia and S Pen stylus features,” the executive noted, vowing to also improve the lineup efficiency in the mid- to low-end segment to remain profitable.

The Note8, scheduled to be showcased on Aug. 23 in New York, is set to compete against the iPhone 8. Lee predicted earnings in the IM division will slide in the third quarter due to expanded marketing expenditure following the release of the Note8.

“Apple’s new iPhone will become the biggest variant for Samsung’s earnings in the second half,” said Lee Se-cheol, an analyst at NH Investment and Securities. “Increased sales of iPhones will aggravate earnings at the IM division at Samsung but the trade-off could come from the fact that Samsung supplies displays and chips with Apple.”

Meanwhile, its board of directors on Thursday approved the third phase of the 9.3 trillion won. Samsung will repurchase and cancel 670,000 common shares and 168,000 preferred shares starting today and the process is set to complete in three months.

The board approved a second quarter dividend of 7,000 won per share for both common and preferred shares.

Shares of Samsung Electronics on Thursday ended at 2,490,000 won, 0.08 percent lower than the previous trading session.