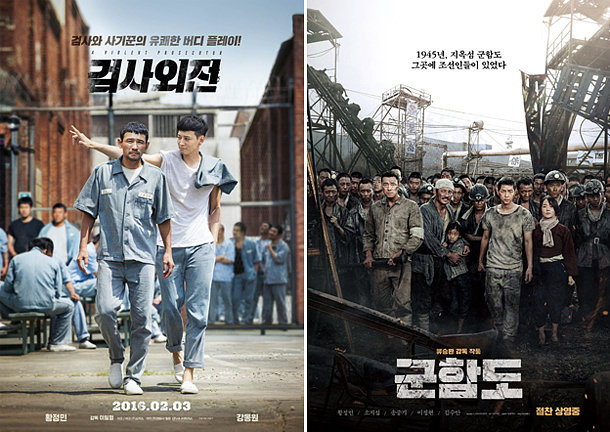 The star-studded historical epic “The Battleship Island” opened at an unprecedented 2,027 screens nationwide on Wednesday, accounting for more than 70 percent of the day’s total of 970,900 admissions. With the feat, the CJ E&M-distributed movie, starring Hwang Jung-min, So Ji-sub and Song Joong-ki, has set a record as the film that has opened at the highest number of screens in the country, beating the record set by 2016’s “Captain America: Civil War,” which opened at 1,991 screens.

Though the record-breaking performance is laudable, the film’s significant box office performance has led to heated discussions about the conglomerate’s monopoly of the local film market, and whether CJ E&M’s vertical integration across distribution and ownership of movie theaters should come to an end.

Over the past few years, conglomerates like CJ Group and Lotte Group have been criticized for dominating screens using their own movie distribution and cinema chain units, depriving films from smaller companies or indie and art-house flicks an opportunity for theatrical debut.

CJ E&M and Lotte Entertainment take up 17.1 percent and 7.6 percent of the film distribution market, ranking first and seventh, respectively. CJ CGV and Lotte Cinema are the top two theater chains in the country and make up 79.8 percent of movie theaters in the entire country.

Discussion over whether these entertainment behemoths should be divested is currently underway. Culture minister Do Jong-hwan proposed a relevant bill in October when he was an opposition legislator. If the bill passes, CJ and Lotte will each have to give up either one of their two movie-related arms. The bill is currently pending at the National Assembly, and aims to solve conglomerates’ “unfair practice of depriving audience’s rights to enjoy diverse movies at theaters.”

Seo Jung, the CEO of CGV, spoke out about the controversy during a media event last week regarding the mid-year performance of the company. “Calls to dismantle [a conglomerate’s] screening and distribution rights based on the U.S. v. Paramount ruling makes me question whether it is correct to judge Korea’s film industry based on a law from 70 years back.”

U.S. v. Paramount, the landmark 1948 anti-trust decision by the U.S. Supreme Court, ended the stranglehold Hollywood studios and distributors had on the U.S. film market. Declaring eight major studios, including Paramount and Warner Bros., a monopoly, the court ordered them to break up the studios’ vertical integration across distribution and ownership of movie theaters.

Seo continued, “I wonder whether a law can catch up with the speed of a rapidly changing industrial environment and technological change,” Seo said. “This kind of regulation and control will shrink Korea’s film industry.”

Some have expressed concerns whether new market entrants would be able to pull off what CJ and Lotte have done if the two choose to keep multi-screen cinema chains upon the passage of the bill.

“Investment and distribution require a lot more trial and error than other industries. The know-how that [CJ and Lotte] have built up over time can’t be ignored,” said a source from film industry who wished to remain anonymous.

But many have stressed the need for breaking the conglomerates’ stronghold on the industry.

“If a distributor also has screening rights, it is very likely to result in a monopoly,” said a source from Cinema Dal, a producer and distributor of independent films.

“Small [independent] movies have a limited chance to screen, unlike [big-budget] commercial movies which are granted a larger number of screenings based on the commercial logic,” the source said.

In order to properly break down the monopoly that dominates Korea’s film industry, lawmakers need to think even further down the road, according to film critic Kim Hyung-seok.

“Though separating distribution rights and cinema ownership is necessary, that itself will not be enough to properly tackle the monopoly.”

Kim further explained the necessity to require multiplex cinemas to screen a certain number of small, independent movies within a certain time period or to boost the government’s support for independent cinemas.