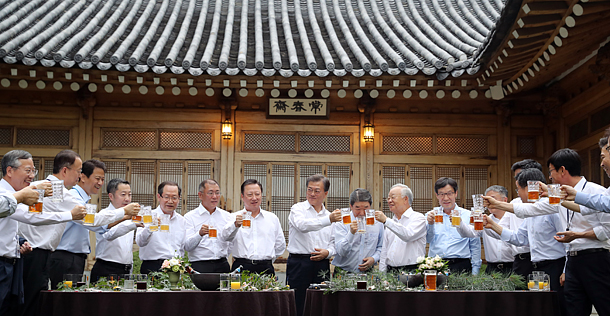 President Moon Jae-in, center, toasts with leaders of the country’s largest business groups on Thursday on the yard of Sangchunjae, a reception house in the Blue House. The event between Moon and business leaders was intended to provide an opportunity for a casual and candid discussion about the country’s economy, his policies and job creation. [YONHAP]

President Moon Jae-in invited leaders of the country’s largest business groups on Thursday for a casual yet candid discussion about the country’s economy, his policies and job creation over beer and snacks at the Blue House.

Chairman Ham Young-joon of Ottogi, a mid-size food maker known for its efforts to create jobs and offer better working conditions, also joined, as well as the Korea Chamber of Commerce and Industry Chairman Park Yong-maan.

The theme was clearly employment. The Blue House’s choice of Gangseo Mild Ale from 7Brau, a local microbrewery, was symbolic as the company is one of the first microbreweries to commercially manufacture beer in Korea. It currently has 34 workers and all of them are permanent employees receiving full benefits.

Creating quality jobs is one of Moon’s priorities. He promised to create up to 810,000 new jobs in the public sector alone during his presidency and urged the private sector to follow suit. He also advocated upgrading irregular workers to permanent employees. Last week, the government said it will upgrade more than 140,000 contract workers at 852 public institutions to full-time staff positions this year.

According to a Blue House official, Moon proposed the so-called hof day in order to encourage more candid talks in a comfortable setting. Hof is a Korean term for bar, taken from the German word hofbrau, or court brewery.

“Instead of wearing suits and ties and sitting at a table for a formal dinner, the president wanted them to take off their jackets and have a casual discussion over beer,” the source said Tuesday when the announcement was first made about the event. “We didn’t set the agenda in advance. It is the president’s intention to listen to the companies’ frank opinions without formality.”

“After the opening remarks by the president and the head of Korea Chamber of Commerce and Industry, the participants will have free discussions,” another presidential aide said Thursday.

In his opening remarks at the reception, Moon said he wants to listen to the candid opinions of the businessmen. “There is no scenario or topic,” he said. “There is no time limit or documents. I planned the event to have a comfortable and frank discussion. I appreciate your coming despite your busy schedules.”

To Hyundai Motor Vice Chairman Chung, Moon asked about the automaker’s struggle to win a competition against China. Chung responded that the situation is tough, but the company seeks to develop new technologies.

With leaders of Shinsegae and LG, Moon discussed the impact of China’s economic retaliation over the U.S. deployment of the Terminal High Altitude Area Defense antimissile system in Korea. Moon also discussed U.S. restrictions on steel imports with Posco Chairman Kwon, who said the firm is seeking a mid-term solution, adding, “We are giving up on sending our products to the United States for the time being.”

The deputy prime minister for the economy, minister of trade, industry and energy and heads of the Fair Trade Commission and Financial Services Commission attended from the government side. Top presidential aides including the chief of staff and the chief of policy also joined the meeting.