‘Waterbomb’ makes a big splash: But a lack of attractions and long lines left some fans wanting more

‘Waterbomb’ makes a big splash: But a lack of attractions and long lines left some fans wanting more 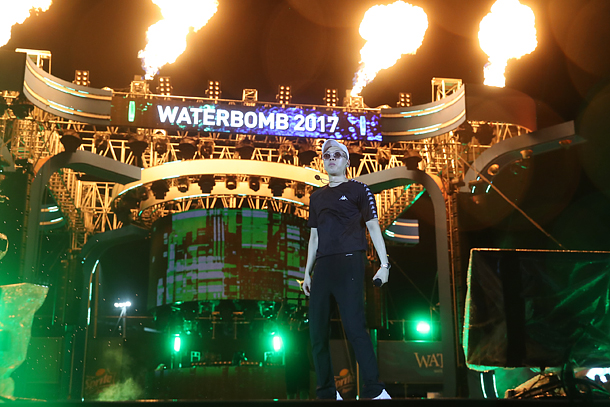 Rapper BewhY, the winner of “Show Me the Money 5” (2016), headlined the third edition of the Waterbomb festival. [VU ENT]

A densely packed outdoor festival is usually not the most attractive place to spend a scorching summer day, especially when the mercury climbs above 30 degrees Celsius (86 degrees Fahrenheit). But it may suddenly sound tempting if the festival involves a water gun fight, swimming pool and live music performed by a few of the hottest artists around, including BewhY, Hyuna and C Jamm.

Hoping to become one of the hottest festivals of the summer, R-rated Waterbomb 2017 Refreshed by Sprite took place on Saturday at Jamsil Sports Complex, eastern Seoul. Marking its third edition, Waterbomb kicked off at 11:30 a.m. and ran until 10 p.m.

Festivalgoers dressed up for the occasion, sporting everything from shirts and shorts to neon bikinis and even halloween-style cop uniforms. Some went even further, with horse head masks and iron man helmets visible among the crowd.

Divided into two teams - green and blue - the crowd engaged in a huge water fight. The two teams were separated by a large iron fence, but were still able to shoot each other with water guns. Performers were also assigned to a team.

Loyalty to the two teams quickly fell apart, however, as festivalgoers and artists both discovered that it was more fun to shoot anybody that crossed their path.

The water blasts from the crowd and the stage surely kept the crowd wet and cool on the scorching day, with some even complaining that they felt cold in the evening after the wind picked up.

Though facilities like a sandy beach-themed lounge decorated with palm trees and a few pools were available, there was not enough entertainment to keep festivalgoers happy for longer than 10 hours. As a result, some tired participants ended up heading for the exit before the festival finished. As there were so few pools, hot festivalgoers hoping to cool off had to stand in a long line before they had a chance to even dip a toe in the water.

In the afternoon, many of the participants spent time either pointing water guns at each other, going for a dip in the pool - or waiting in a long line next to it - and munching on food from snack bars. A lengthy queue for the photo zone against a backdrop of music being performed by artists like reggae duo Skull & Haha and rapper Sleepy was also popular. 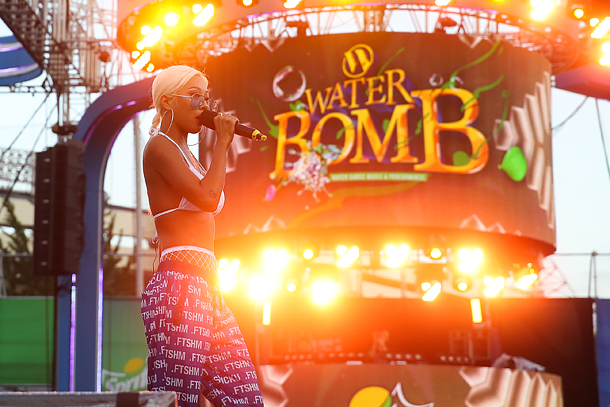 But festivalgoers started flocking toward the stage as the sun began to set, which is also when popular artists started to perform.

Singer Hyuna from now-disbanded female act 4Minute and rapper Jessi were among a few of the most well-received female artists. Their dance moves on hit songs like Hyuna’s “How’s This?” and Jessi’s “Ssenunni,” backed by the fancy stage lighting and constant sprays of water, both toward the stars from the participants and vice versa, generated continuous cheers and shouts of excitement.

The cheers grew even louder as some of the trendiest rappers took the stage, including C Jamm and BewhY, both of whom became household names through their appearance on hip hop survival audition program “Show Me the Money 5” (2016).

BewhY, who was the winner of the show, closed the festival with some of his most popular tracks like “Forever,” “Day Day” and “The Time Goes on.”

Forced to conform to a rigid schedule, the artists hardly had an opportunity to come back on for an encore, despite the requests shouted from the crowd and the constant flow of water shot by excited fans.