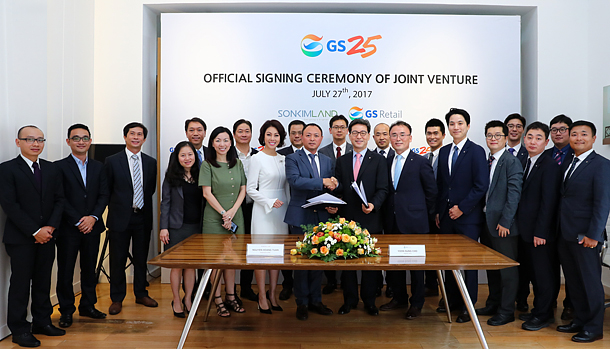 The convenience store chain’s parent company, GS Retail, signed a deal with Vietnam’s SonKim Group last week to establish a joint venture and hold a 30 percent stake. The joint venture will be in charge of operating local GS25 franchises in Vietnam.

GS Retail will later sign a master franchise agreement with the joint venture to receive royalties on trademark rights and operation. GS will earn dividends as a 30 percent stakeholder in the joint company.

GS Retail has worked with SonKim Group in the past. In 2012, the Korean company purchased a 30 percent stake in SonKim’s home shopping channel and jointly launched VGS Shop to tackle Vietnam’s home shopping market.

The Vietnam venture is GS25’s first foray into a foreign market.

“We received requests from many countries, including China and other Southeast Asian countries, to export our brand,” a GS Retail spokesman said. “After months of research, we concluded that Vietnam had the largest potential for growth.”

The company cited Vietnam’s rising consumer purchasing power and large population of people under the age of 35, the demographic most likely to shop at convenience stores.

According to data from Vietnam’s statistics agency, the country’s local retail market was worth $118 billion last year, up 10.2 percent from 2015. The U.S. consulting firm A.T. Kearney pushed Vietnam up five ranks in its global retail development index earlier this year, placing it at sixth. The report, published in June, said that convenience stores and mini-marts were the fastest-growing markets.

Vietnam has an advantageous demographic for convenience stores, with people under 35 making up 57 percent of the entire population. Those in their 20s and 30s account for 34.6 percent of the pie.

Earlier in mid-July, rival chain CU said it would set foot in Iran in collaboration with a local partner.

Under a master franchise agreement, CU’s parent company, BGF Retail, is offering brand rights and operational systems in return for an initial fee of 3 million euros ($3.5 million) and royalties from additional branches.

CU and GS25 are the two leaders in the Korean market, with stable market shares of around 30 percent each in terms of number of branches. With a solid business base in Korea, their attempts to enter foreign markets can be interpreted as a search for new revenue sources. It’s a significant advancement considering that Korea’s convenience store industry started with franchises imported from abroad like American-Japanese chain 7-Eleven and Japan’s FamilyMart.

Expanding into foreign markets may turn out to be smart move for CU and GS25 considering Korea’s current market situation. Convenience stores have long been considered the remaining lucrative retail outlet in the country, but the race to enter the market has fueled heavy competition among local players.

Shinsegae Group, for example, recently announced a major overhaul of its convenience store brand WithMe, changing it to Emart24.

The Korean government’s drive to raise the minimum wage by 16.4 percent next year is seen as another risk for local convenience stores, with many owners saying they’ll have to lay off part-time workers to pay them more.