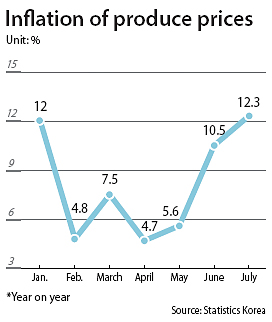 Consumer prices have risen to a four-month record after a prolonged summer drought followed by heavy rains affected the country’s farms last month.

Prices in July rose 2.2 percent compared to the same month a year ago, according to Statistics Korea data released Tuesday. Inflation had hovered around 2 percent between April and June this year.

The largest contributor to the rising inflation has been produce prices.

Egg prices surged 64.8 percent as the supply is still recovering from a bird flu outbreak earlier this year. Egg prices have risen at least 60 percent year on year for three straight months since May.

Meanwhile, squid prices rose 50 percent in July, and the price of pumpkin jumped 40.5 percent. Potatoes cost 41.7 percent more than last year, and the price of the staple summer fruit, watermelon, increased 20 percent. The price of napa cabbage was up 8.3 percent.

As a result, fresh fruit prices rose 20 percent and that of fresh vegetables went up 10 percent. Overall fresh produce prices were up 12.3 percent.

But food prices weren’t the only contributor to higher inflation. The cost of utilities rose 8 percent. Statistics Korea attributed the sharp rise to a base effect from last year when the government temporarily lowered electricity bills between July and September. The increased utility costs contributed to raising overall inflation by 0.29 percent.

“We expect consumer prices to stabilize around September,” said Woo Young-jae, a researcher at Statistics Korea. “We project annual inflation to be around 2 percent.”

President Moon Jae-in’s government, which promised to lower the financial burden for households and boost the economy through consumption, laid out a plan Tuesday to stabilize the inflation. The government said it would release its storage of fresh produce to the market to help lower prices.

Pork, which receives high demand during the summer break as a barbecue item, will be sold at up to 30 percent off at major discount stores until the end of this month.

During a cabinet meeting on Monday, the government also approved a measure to lift tariffs on imported eggs. The government plans to import 28,000 tons of duty-free eggs until the end of this year.