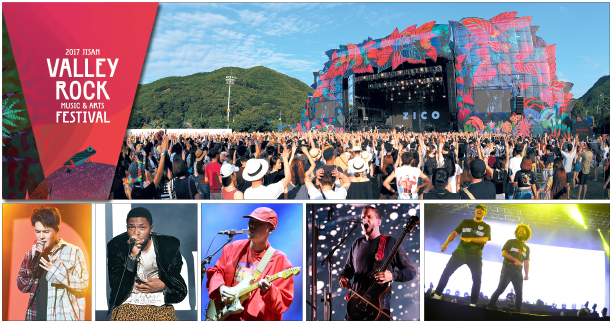 Fans cheer during a performance by rapper Zico, top, on the second day of the festivities at Jisan Valley Rock Music & Arts Festival. From left, breakout R&B artist Dean performs one of his hit songs. Gallant, known for his signature falsetto, sings his heart out on stage. Oh Hyuk of band Hyukoh plays the guitar while singing. Headliner of the second day Sigur Ros brought a creative rock spirit to the traditional rock festival. Day one headliners Major Lazer dance along with the crowd to some of their biggest hits. [CJ E&M]

ICHEON, Gyeonggi - Over the humid final weekend of July, the Jisan Valley Rock Music & Arts Festival, held at this lush ski resort a 90-minute drive outside of Seoul, proved why it is billed by CNN as one of the world’s 50 greatest summer music festivals over three days of non-stop music and entertainment. The heart of the festival were performances from some of the biggest names internationally and domestically, ranging from Hyukoh to Major Lazer and Gorillaz.

With its origins as a rock festival, many attendees over the past few years have been disappointed by the lack of big name rock bands on the roster of performers. Faced with declining ticket sales in recent years, festival organizers CJ E&M worked hard to grow the appeal of the event by inviting a wide range of performers, hoping to sell more tickets and attract an audience of diverse music fans.

On the first day of the festivities, Friday, July 28, the headliners showed the crowd of 150,000 a good time. When Danish four-member band Lukas Graham, took to the stage, many fans crowded the Green Pampas Stage, where the band was performing. After performing their hit songs “Drunk In the Morning” and “7 Years,” the band was moved to tears after the audience joined together to sing along.

Lorde, known locally for her breakout hit “Royals,” was also astonished by the crowd as fans loudly sang along to every word of her debut single. Her set was dominated by tracks off of her latest “Melodrama,” which was released in June, and which enjoyed both critical and commercial success.

The headliners of the first day, Major Lazer, put on a show that anyone would be proud of. Their medley of hit songs such as “Lean On,” “Run Up” and “Light It Up” kept the energy high and had the entire crowd dancing late into the night.

Festival attendees brought tents, mats, portable seats and inflatable cushions to view their favorite artists while relaxing near some of the festival’s art installations. [CJ E&M]

The second day of the events was jam-packed with talent as well, and with over 250,000 attendees, it’s safe to say all three stages - main stage The V, sub stages Green Pampas and the Tune Up - were full.

Performances from Lany and Soran were all a success, while rapper Zico of boy group Block B saw one of largest crowds of the weekend. Fans went wild when he kicked off his set with his hit single, “Tough Cookie.”

Gallant, the R&B singer known for his signature falsetto, lit up the Green Pampas with his hits “Shotgun,” “Weight In Gold” and “Cave Me In.” He also brought on surprise guests to the stage - R&B vocalist Lee Hi and rapper Tablo.

Saturday’s headliner was Icelandic band Sigur Ros, who lit up the night with their soaring sounds and signature stage visuals.

One of the surprises of the weekend was the uproarious response from the crowd when R&B artist Dean took the stage. Only two years after his debut, the singer has seen a surge in fame due to the success of his single “D (half moon)” and his appearance on hip-hop audition program “Show Me the Money Season 6.”

Closing out the weekend was English virtual band Gorillaz. The band, who was inducted into the record books after its 2005 album “Demon Days,” which went five-times platinum in the United Kingdom and two-times platinum in the United States, put on an unforgettable show with their trademark cartoon visuals. Playing a set filled with songs both from their latest album and their almost 20-year catalog, the crowd when wild went they performed their hit singles “Feel Good Inc.,” “Clint Eastwood,” and “Saturn Barz.”

All in all, it was another successful year for the annual music and arts festival. The debate over how close it will stay to its rock roots will certainly continue in the future, but the festival has solidified itself as the premiere summer music festival in the country which can attract some of the world’s biggest talents to their stages.

Even with a few minor audio hiccups on the second day of the festival, the event went off without any major hitches and many attendees will surely be looking to return next year with high expectations. With room to grow, whichever direction Jisan Valley Rock Music & Arts Festival decides to take, it will most likely only get better for the vast majority of the audience.