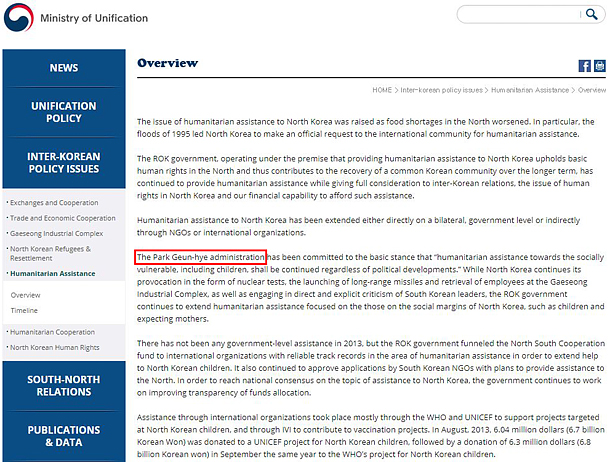 The Unification Ministry refers to the Korean government as the “Park Geun-hye Administration” on its English website. It has been five months since Park was removed from office after her impeachment and nearly three months since President Moon Jae-in was sworn in. [SCREEN CAPTURE]

The Korean government’s official English-language websites are full of mistakes and factual errors, with one site still written as if disgraced former President Park Geun-hye were still in power.

The Unification Ministry, which handles inter-Korea relations, has not updated its official English site in the nearly three months since the start of the Moon Jae-in administration and five months since Park was removed from office on March 10.

The ministry repeatedly refers to the government as the “Park Administration,” even though the former president is currently standing trial on corruption charges.

“The Park Administration will strive to manage peace and improve inter-Korean relations by building trust between Pyongyang and Seoul,” the ministry states on the website.

It adds that “The Park administration places top priority on national security. Based on this principle, the ROK government will decide whether or not to resume inter-Korean dialogue and attempt to settle North Korean nuclear issues.” ROK is an acronym for the Republic of Korea, the official name for South Korea.

Deciding whether or not to resume inter-Korea talks based on national security was a key policy of the conservative Park administration.

The website also states that the North Korean Human Rights Act is stuck at the National Assembly and is yet to be passed “due to differences between the ruling party and opposition parties.”

In reality, it has been a year and a half since the long-delayed bill addressing human rights in North Korea was passed with bipartisan support. “The ROK government is working closely with the National Assembly to get the North Korean Human Rights Act passed into law,” says the ministry website. 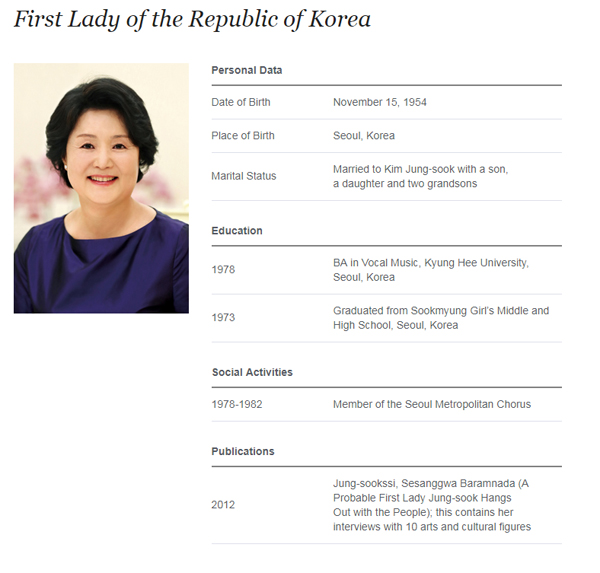 The Unification Ministry’s website is one of numerous examples of official English sites that are managed poorly or neglected, laden with factual errors, grammatical errors and awkward expressions.

Korea.net, a state-run website that “represents the voice of the Korean government,” explains that First Lady Kim Jung-sook is “married to Kim Jung-sook,” rather than Moon.

The Foreign Affairs Ministry, the government body most likely to have the highest level of English, is also not free from errors.

The Foreign Affairs Ministry states on its English site that it will strive to “enhance its national brand as a trusted fascinating Korea.” The ministry also notes it will build its image “through active public diplomacies” — the correct phrasing should be “public diplomacy.”

The Environment Ministry’s site is also laden with English sentences that are awkwardly translated from Korean without taking into account the nuances of the language. It says it is “committed to listening to your voices and establishing values of the environment.”