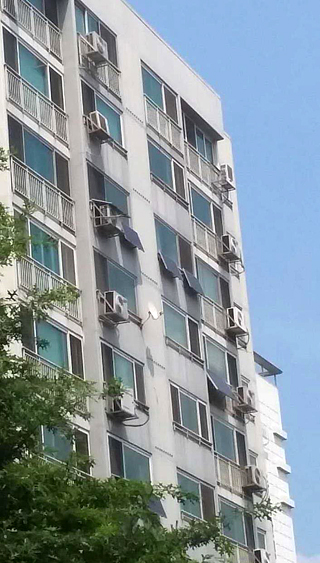 Several dozen solar panels are mounted outside the windows of a 1,224-unit apartment complex in Huikyung-dong, eastern Seoul, on Thursday. [YONHAP]

Whenever Lee Gyu-seong reads the solar power meter in his living room, he thinks he has made the right decision for his family and, by extension, Korea.

The slick photovoltaic panels mounted in front of his apartment’s windows can generate 25 kWh of electricity a month - enough to power a two-door refrigerator.

“I thought we had no choice but to go solar as a source of renewable energy as it can cut back on the use of fossil fuels,” Lee said in a recent interview with Yonhap News Agency.

Lee’s case illustrated that solar power is gaining ground here with more people being open to the notion of “going green” by slashing carbon emissions, switching to renewable energy sources and ending a heavy reliance on fossil fuels.

Korea has recently decommissioned its oldest nuclear power plant and put on hold the construction of two nuclear reactors in Ulsan, an industrial city located about 410 kilometers (250 miles) southeast of Seoul.

The country is set to decide by Oct. 21 whether to resume or permanently halt the construction of the two reactors, which are nearly 30 percent complete.

The abrupt suspension came as President Moon Jae-in has vowed to boost the power supply from clean and renewable energy sources while pushing to wean the country off nuclear and coal-fired plants.

In June, Moon vowed to scrap all existing plans for new nuclear power plants and not to extend the operation of any aged reactors nearing the end of their initial life cycles. Korea has 24 nuclear reactors, generating about 21 percent of the country’s total power supply.

Moon has also pledged to shut down 10 aged, coal-fired power plants by 2022 in a move aimed at reducing greenhouse gas emissions that scientists say are to blame for global warming.

The president’s policy is an apparent morale booster to Lee, a 69-year-old retired man, who installed two solar panels in front of his apartment windows in 2013 and 2014.

Small solar panels are meant to supplement electricity from the utility grid. If solar panels generate more electricity than people use, the net meter spins backwards, meaning money is saved.

“I told people the benefits of solar panels by showing them utility bills,” said Lee, the first person who installed solar panels in his 1,224-unit apartment complex in Huikyung-dong, eastern Seoul.

His word-of-mouth campaign has apparently worked. A total of 45 households in his apartment complex have joined Lee in installing solar panels.

Na Jong-sook, a 68-year-old woman who lives in the same complex, said solar energy is a step in the right direction, as it produces energy without polluting the air.

Still, not everyone agrees with going solar.

Hwang Jeon-sik, a 70-year-old, complained that he had to remove his solar panels from his apartment windows in November, just weeks after installing them. Community leaders of his apartment complex in Huikyung-dong decided to keep residents from installing new solar panels, citing safety concerns. Some of them also called solar panels eyesores.

However, the decision did not affect those who already had solar panels installed.

Jeoung Seoung-hyon, an official from Kyungdong Solar Energy, a provider of solar panels, dismissed safety concerns, noting that his firm has so far installed about 3,500 solar panels, but none of them had problems like falling to the ground from high-rise buildings.

Solar and other renewable energy appear to be gaining traction amid global efforts to cut down on heat-trapping gases.

In 2015, Korea offered to cut greenhouse gas emissions by 37 percent from 850.6 million tons of carbon dioxide equivalents by 2030. The total is the amount Seoul says it would have released if it took no steps to curb the releases of gases.

Seoul Mayor Park Won-soon has floated the idea of installing solar panels at every home across the country as part of efforts to increase the share of renewables in the country’s energy mix dominated by fossil fuels.

The Seoul Metropolitan Government has begun to provide subsidies to those who want to install a 260-watt solar panel on their apartment windows or on rooftop, cutting the cost for a solar panel to about 100,000 won from about 600,000 won.

Nearly 34,000 households in Seoul installed solar panels between 2003 and June this year, according to the metropolitan government.

Seongnam, a city just south of Seoul, said it also provided subsidies worth more than 1.6 billion won to 870 households to help them install solar panels in their apartment windows between 2010 and 2016.

“Together with rapidly falling prices for batteries to store energy, solar panels on rooftops and in large-scale solar parks can make a huge difference in cutting greenhouse gas emissions, reduce air pollution and save on the cost of importing fossil fuels,” he said in an email.

The energy company plans to build a 10-megawatt solar power facility and additional 30-megawatt facility by December 2018, said Lee Sang-hoon, a general manager handling the issue at the company.

He said the one of the world’s largest floating power-generating facilities could generate enough power to provide electricity for more than 11,220 households near the dam per year.

The 100-kilowatt solar power facility allows the farmer to grow rice while generating up to 400 kilowatt hours of electricity a day, which is connected to the power grid and sold to Korea’s state-owned Korea Electric Power.

An official of the Korea South-East Power said his company plans to expand the pilot project.

“Saving may be negligible for an individual, but solar energy could make a huge difference if more panels are installed across the country,” Na said.