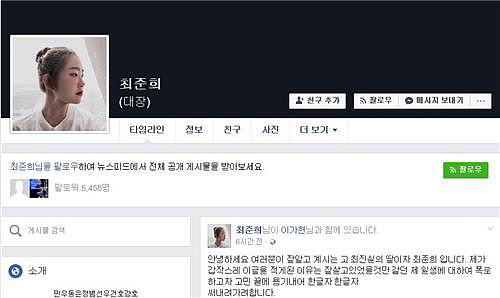 Choi Jun-hee, the 14-year-old daughter of late actress Choi Jin-sil who committed suicide in Oct. 2, 2008, claimed on Facebook Saturday evening that she had been beaten regularly by her maternal grandmother.

On Friday at 11 p.m., Choi’s brother, who is also being taken care of by the late Choi’s mother, called the police after Choi Jun-hee had a physical fight with her grandmother. “Jun-hee and her grandmother fought over who should clean the dinner table, and their fight got physical,” reported the police. “We terminated the matter on scene because neither of them wanted to take the matter further.”

Choi Jun-hee has been under the care of her grandmother since the death of her mother nine years ago, during which she claims that her grandmother’s “abuse and violence kept getting worse as the days went on.” Her post included accounts of the youngster’s grandmother stopping her from beginning a career in pop music even though she had been accepted as a member of the “Produce 101” program, an idol audition program that aired on Mnet a year ago.

“When I had a boyfriend, she beat me with clothes hangers and bit my hand; the scar is still here. When we went on a trip together, she beat me and choked me, saying, ‘Your mother shouldn’t have given birth to you,’” wrote Choi.

The police are planning to look thoroughly into the matter. “As Jun-hee claims that she had been regularly abused, we’ll look further into the case by questioning the family and other acquaintances,” said the police. “We haven’t began proper investigations yet because Jun-hee is mentally unstable at the moment.”