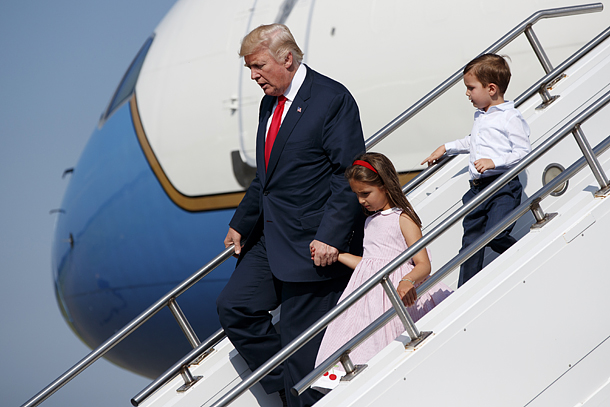 U.S. President Donald Trump began his controversial first summer vacation on August 4. The controversy stems not from the fact that he will be away from the White House for 17 days, but that he is once again not keeping to his words.

The HVAC system in the White House will be replaced, and staff will not report to work until August 21. But Trump often criticized President Barack Obama for taking vacations. For example, in his 2004 book “Think Like a Billionaire,” he wrote, “Don’t take vacations. What’s the point? If you’re not enjoying your work, you’re in the wrong job.”

Additionally, as he is heading to the Trump National Golf Club in Bedminster, New Jersey, he is being criticized for using the vacation as a marketing vehicle. Trump spent 13 of the past 28 weekends since his inauguration at his golf clubs in New Jersey, Florida and Virginia.

Historically, U.S. Presidents have taken vacations despite criticism from political enemies, and many visited their homes or vacation houses like Trump. Lyndon B. Johnson, Ronald Reagan and George W. Bush spent time on their ranches in Texas and California. In his eight years in the White House, President Bush spent as many as 490 days at his ranch in Crawford, Texas, riding mountain bikes or clearing bushes.

Harry Truman made his official presidential retreat in the South. He spent 193 days in the naval station in Key West, Florida. Bill Clinton and Barack Obama each spent time at Camp David in Maryland and both vacationed at Martha’s Vineyard in Massachusetts.

In the Senate, Trump’s healthcare reform bill aimed at repealing Obamacare — which he had promised to replace during the campaign — did not pass again after some Republican Senators opposed it.

Special Prosecutor Robert Mueller is investigating allegations involving Russia, and the president himself and his son Donald Jr. are targeted.

When White House Deputy Press Secretary Lindsay Walters announced Trump’s vacation plan on August 3, she said that Trump will be taking off for a “working vacation.” As the so-called August crisis theory is stirring up Korea, this may be a good time for President Moon Jae-in to set up a forum with Trump to discuss North Korea and ICBMs.

After all, Richard Nixon invited Soviet leader Leonid Brezhnev to his home in San Clement, California where they agreed to pass the Strategic Arms Limitation Talks.